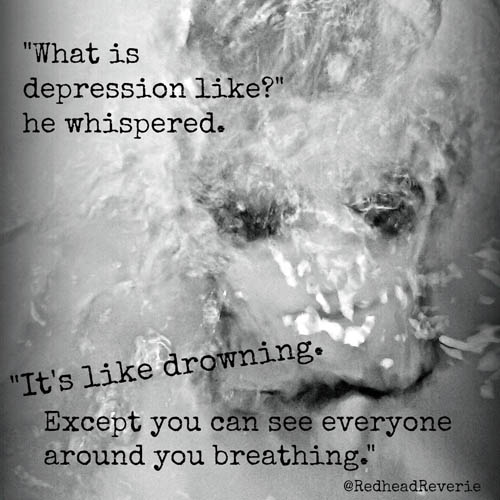 On a daily basis I’m running a race.

A race in my mind between what’s real and what’s not.

Each day is a struggle to surface from the bottom of the proverbial pool.

The finish line is elusive and often I feel I’m just running in place, but this spring I finally felt that I’d reached my goal.

My finish line wasn’t at the end of a racecourse it was on a stage.

In May, I opted to produce This is My Brave, a theatre production that compiles stories from locals who have been touched by mental illness.

My race with mental illness has lasted a lifetime beginning with myself, family members, my dad and most-likely my eldest son.

The endurance it takes to compete in triathlons is nothing compared to the determination it takes to wake up every morning and forge forward while inside you are suffering.

Triathlete and movie star Robin Williams knew that struggle. It’s the one-year anniversary of his death, and while many remember him as Patch Adams or Mrs. Doubtfire.

I also remember him as a triathlete – encouraging others and supporting the CAF.

Little did we know he was running a race in his head too.

When I made the decision not to race this year, and instead do the show. I never thought it would give me the same rush of accomplishment that running,, swimming and biking could.

This is My Brave quickly became my “triathlon”. Bricks were replaced by long rehearsals, and advocacy became my new PR.

My training partners were my “people”. They were mothers, fathers, daughters, sons and friends – each one running alongside me trying to beat the beast of mental illness.

The bravery it took to walk on that stage and share their stories with complete strangers rivaled any I’ve experienced during race day.

It was amazing and heart wrenching all at the same time. 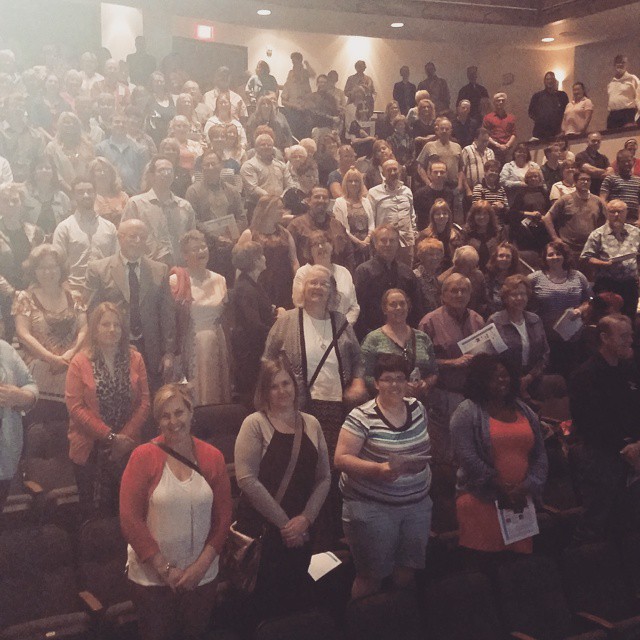 If so many people were affected and running this race, why were we not running it together? Why do people with mental illness feel ashamed and alone?

We need to change the way people think about mental illness, erase the stigma for good and run this race together.

Our show was recorded and can be viewed here. Make sure to grab some Kleenex first.

If you or a family member are struggling with mental illness, please feel free contact me – you do not have to run this race alone. 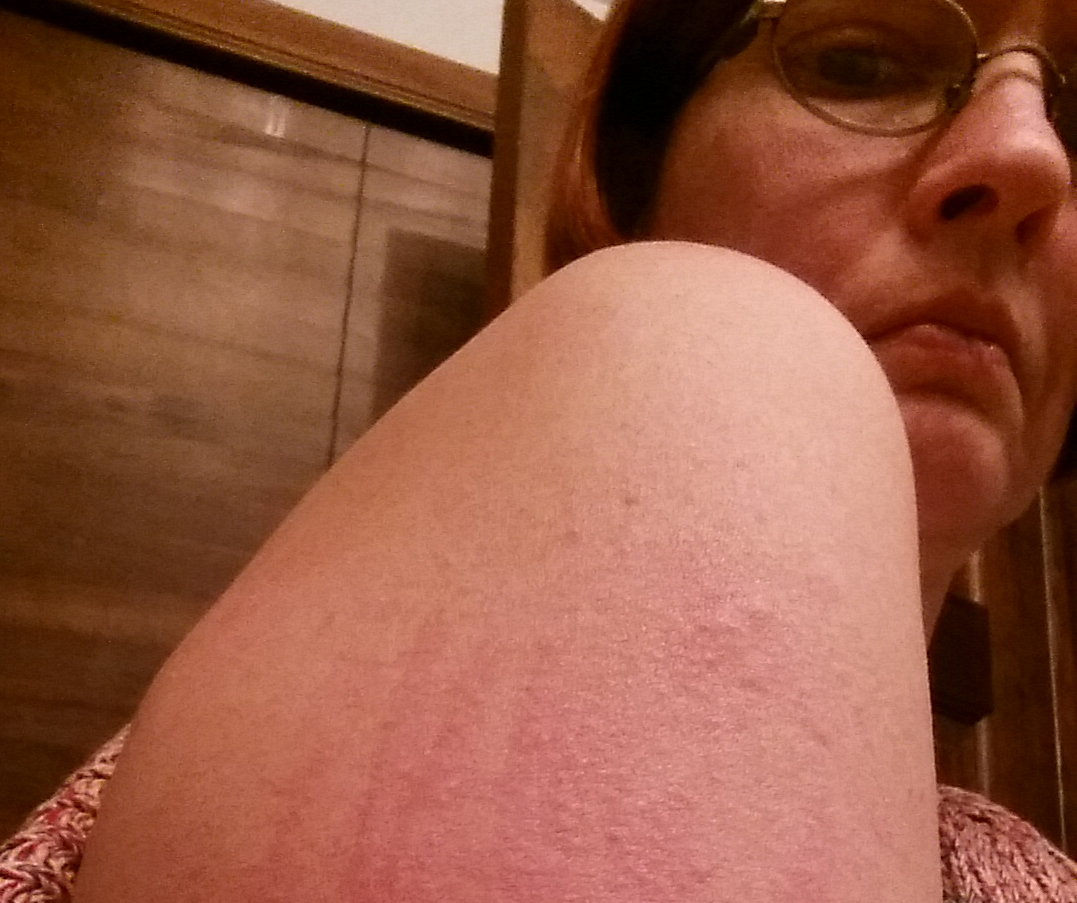 It’s no secret I’ve had my issues with food.

For half my life food was the enemy, the other half an annoying necessity. Years of dieting had tainted me on food programs, and fads {can we say Atkins}. Plans that are never for the long term, and are more about eating weird thing with extreme limitations than about creating a lifestyle.

A healthy lifestyle – that’s what I was looking for.

I stuck to my workout schedule, tried to eat clean, but really my eating habits were still pathetic. Cereal became a food group, and spoonfuls of peanut butter were justified “protein” fixes. I had read about Paleo and the Whole 30, but quickly dismissed it as another fad, and the same with being gluten-free. “Oh, I can’t eliminate whole food groups,” I lamented. “That would truly trigger my anorexia again.”

Life went on, and I didn’t think about it again. Until…

October, the night before we had went to a haunted house. I remember that evening my scalp and chest were horribly itchy. I attributed it heat rash, and tried not to scratch it. By mid November, it had snowed and I soon realized my rash, which was still very prevalent, wasn’t just a seasonal allergy.

On top of the rash, I was experiencing extreme swelling in my fingers, ankles and face, my weight began to shoot up. I gained at least 5 – 7 pounds in a week, and went from 130 to 150 from October to December even with a bout of stomach flu. Something was very wrong.

A doctor’s visit ruled out RA and an autoimmune disorder, so I was sent to dermatology. They were kind of concerned about rash, especially when I showed them the large bruise I had acquired from scratching so fiercely. Biopsies were taken and more blood work done, and still nothing.

“It’s just an allergic reaction,” said the doctor. “Take two Zyrtec a day, and eventually it will go away.” They also attributed the weight gain to my antidepressant.

After a month of taking Zyrtec and falling asleep at my desk, I said “screw this”, and decided to take matters into my own hands.

It was time to heal my body and the first place to start was with my diet.

I’m on day 9, and have seen miracles happen, on a physical, mental and emotional level. {more on that later}

As a newbie starting the Whole 30 wasn’t without its challenges.

Here’s a few of Whole 30 Newbie Lessons you need know before you begin your journey.

1. Don’t start the Whole 30 right before a big event, like a tailgate party or Christmas with your family.

I did and it was hell. Sitting in a restaurant while everyone else ate pizza was a type of torture I never want to experience again.

I scoffed taking a day on the weekend to meal prep, but I soon realized that the more I did on the weekend the less likely I was to stray from the plan. Also, my crockpot has been my new best friend.

It took a $250 grocery bill for me to realize that shopping around and buying meat on sale is how you can afford to eat healthy. Also, buy a Costco membership and then split groceries with a friend, you will thank me when stock your fridge for two weeks on only $100.

4. Speaking of friends, you will need one.

I couldn’t do this plan without the help and support of my friend Ashli. She’s like my Whole 30 sponsor. When I almost made Paleo pancakes she talked me off the edge and made sure I didn’t have SWMPO. We’ve also been trading recipes, which helps with the meal planning and boredom.

5. A positive attitude is everything.

Vegetables are my nemesis, and eating anything green even ice cream gives me the creeps. However, I went into the Whole 30 with a goal to heal my body, and with that positive attitude and open-mindedness I’ve been successful so far. If you are fighting it too hard, then maybe you aren’t ready. I compare it to an alcoholic who is going to AA, you have to WANT to help yourself or you’re not going to be successful.

As I mentioned, day 9 is here and it’s been good so far {see that positive attitude}.

There are good days and bad days.

However, I’m hoping as I continue there will be more good and less bad in store for me.

Favorite recipes so far include:

Sweet Potato, Apple, Pancetta Hash from Gutsy by Nature
{modified with compliant bacon, and nutmeg instead of sage}

Have you done the Whole 30?

Do you want to try?

I’d love to hear your story. 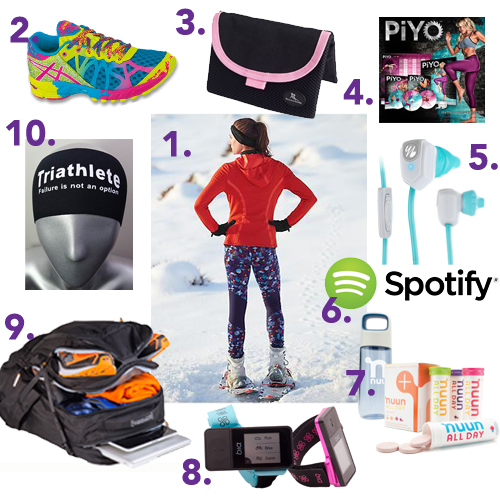 The countdown to Christmas has begun.

If you are like me, you are probably aimlessly wandering around the mall looking for last minute gifts and stocking stuffers. Well I’m here to help you find some direction.

A few weeks ago, I put together a holiday gift guide for the fit fanatic in your life. If you need last minute ideas, this might be just what you need to stop the aimless mall wandering.