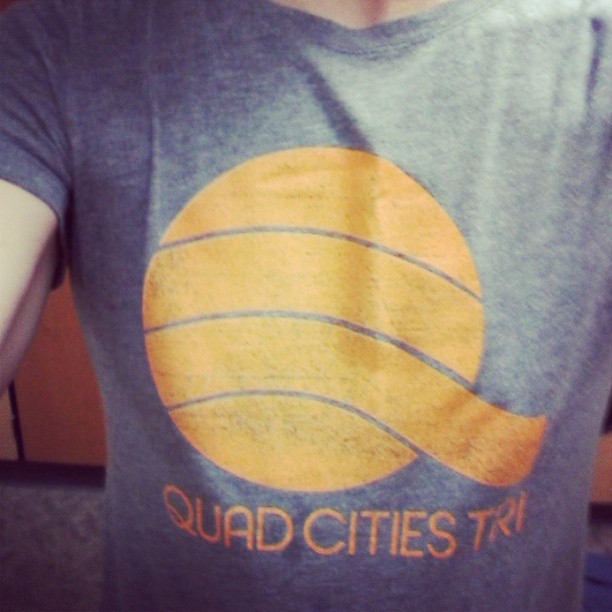 Whew! Well, training is over, the triathlon is over and now it’s time to get back to business. I’ve been wanting to share more about my triathlon journey.  The emotional aspects like how to train, work, be a wife and mom, and compete all in three months.  I also want to share products, and tips that help me along the way.

Welcome to the first edition of GIVE IT A TRI, your guide to triathlons.

Keep in mind I’m a recreational triathlete, and my goal is to have fun and still be competitive. I’m not a trainer or fitness professional {however I know a few and will be sharing their insights}. I’m just a mom who tris, sharing my journey one lap, one bike ride and one run at time.

The butterflies were practically bursting out of my tummy for weeks leading up the race, which is so odd because this was the fourth year I’ve competed in the Quad Cities Triathlon {sprint}. I know the route like the back of my hand, I know where the ins and outs are, but it still doesn’t matter. My tweets and Instragram photos were all hashtagged RACENERVES even up until race day. Ironically, when I brought this up to my coach she also admitted that she suffers race anxiety as well, and proceeds to cry before every race…Hmmmm….reassuring or worrisome? Not sure…

What DID help the race nerves was meeting the two other girls my coach trained for this race. We met up at packet pick up, and chatted about the race while getting our tats. One of the best things about this race is that my age tat is always under my actual age. Did you know I’m really only 35…I wish…

Once we were done, the girls joined me at my moms for our traditional pre-race spaghetti dinner. We stuffed ourselves and talked racing, training and all things triathlons. After three years, I was able to share some of my knowledge about the race, and just triathlons in general. I felt so smart. 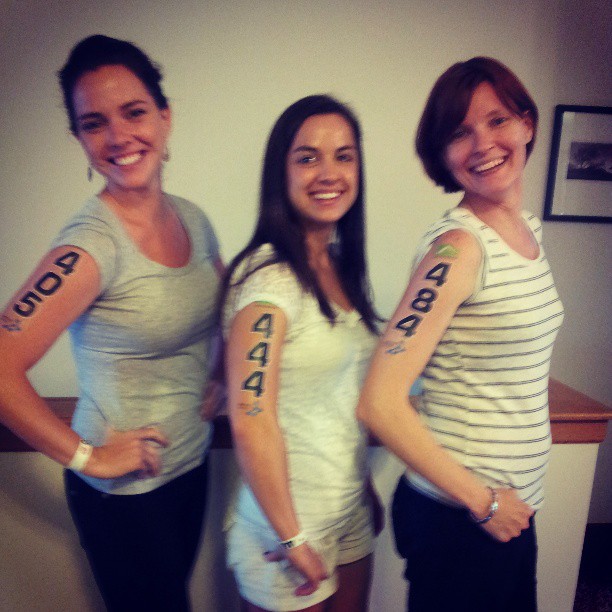 Then it was time for them to go and I was left with my butterflies to attempt sleep. I think I competed in the triathlon a dozen times while sleeping; dreaming of swimming, biking hills, and running strategies. My brain was going so fast I woke up at 4:30 am exhausted.

I squeezed into my race outfit. A Pearl Izumi number that all of you voted for, which thankfully had the most padding to protect the girl parts. 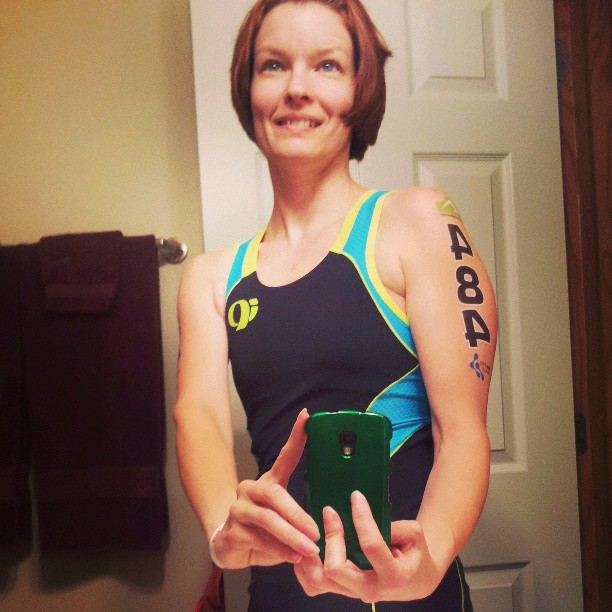 We made our way out the park, and as always mom caught the bus and I biked in, because if you park inside the park you will never get out. This is the one race where they close the whole route to traffic, which makes me love it even more.

Once inside I made a bee-line for the porto-potties and soon discovered that there were less than the year before, which meant at 6;40 only 5 minutes before the close of transition I was still in line. UGH….this didn’t not make the butterflies happy. After I drained my mom-bladder I ran as fast I could to the transition, squeezed into my wetsuit, snapped my swim cap on and headed toward the murky water. I barely had time to fill my wetsuit before they pulled us out of the water. No lap practice. No warm up. Nothing. This would prove to be my demise during the swim portion of the race.

That and the fact that the butterflies had flown the coup and I was too relaxed, so there wasn’t enough adrenaline to jumpstart my swim. I dolphin dived like coach taught me, but quickly became winded and when I tried to put my face in to start my free-style I just couldn’t do it. So, I bear crawled a bit, breast stroked a bit and by the time I reached the turnaround I felt confident to try to free-style again, and that’s when the cramp struck. Right in my calf, a large knot of pain formed and first thing I thought was “People drown from this” so I backed off and just did the breaststroke till I could touch {another mistake} I was supposed to swim till “my boobies hit the sand”, instead the moment I touched I high-tailed it out of the water.

As I ran up the hill I could hear my mom cheering me on. Little did she know at the time I was trying to concentrate on peeing so I wouldn’t have to go on my bike.

The first transition was HORRIBLE, because it had started raining. HARD. I was wet, my socks were wet, my shoes were wet and my bike pedals were wet. It took me 4 MINUTES to get ready. Damn…

I’d have to say my strongest and most favorite part is the bike ride and now that I had my rented road bike it was so different. In year’s past I used my TREK hybrid. A monster of a bike that is good for pulling kiddos, but not so good to race. Coach’s bike clinic was priceless and I followed her directions to the letter. Found the sweet spot on the flat, made sure to always be pedaling even on the downhill and shift at the right time uphill. Other than some slippery corners and a nasty head wind that lasted a mile or two the ride was perfect and I finished it in under an hour.

Getting my running legs back after the bike ride took a little time, but I vowed not to walk and I kept up my grandma pace. Sometimes, pacing with someone else till I couldn’t keep up then I’d back off again. I wish I would have had my Heart Rate Monitor for the run so I could pace myself better, but I’m not an eliteist so it really didn’t matter. Of course at the one mile marker I started sprinting, and did what I like to call my Hanna run {it’s the WORST movie, but I swear the way she runs makes me go faster}.

I crossed the finish line and heard my name called. I was DONE!

I immediately went to the race results tent to check my time. There was a lot riding on this improvement. The money put toward coaching, the money put toward renting a road bike, the sacrifices made by my family, and all the blood, sweat and tears.

“Brook Easton, 484,” said one of the volunteers. She handed me the slip of paper and I held it to my chest, scared to look. Flipping the small piece paper over I immediately made my way to the bottom

While I do owe some of it to switching to a road bike, I do still have to pedal the thing and know how to gear it. Also, I did take a minute off my swim and 4 minutes off my run.

So, was it worth it?

It was A LOT of money, between coaching and renting the bike. However, next year {if there is a next year} I won’t need a coach. I think I have laid enough groundwork to train on my own. And hopefully I’ll be purchasing a road bike and trainer this year {hint, hint if you need a gift idea}. As for the family stuff…that’s truly where it sucked. However, it was for thirteen weeks, and I think life can make some adjustments for thirteen weeks.

In one race my triathlon season is over. Realistically, I can only do one a year {see above for family}. So I’m ready to hang up the bike, the goggles and running shoes for a while and focus on other things.

Like spending Saturdays at the pool with the kiddos, grilling out and playing in the sprinkler.

A special thank you to my mom, who for the past two years has hosted my pre-race spaghetti feast and woke up with me at the crack of dawn to support me.  And also to my family, who put up with my aches and pains, early morning training sessions and constant triathlon babbling.

What race do you have coming up? Share it with me and I’ll give you a GOOD LUCK shout out!

If you have a question about triathlons, triathlon training, or just how to balance fitness and life email me {see that envelope in the header, click it} And I’ll answer your question in the next GIVE IT A TRI.

2 thoughts on “Give it a TRI: {#QCTRI} Quad Cities Tri Race Recap”