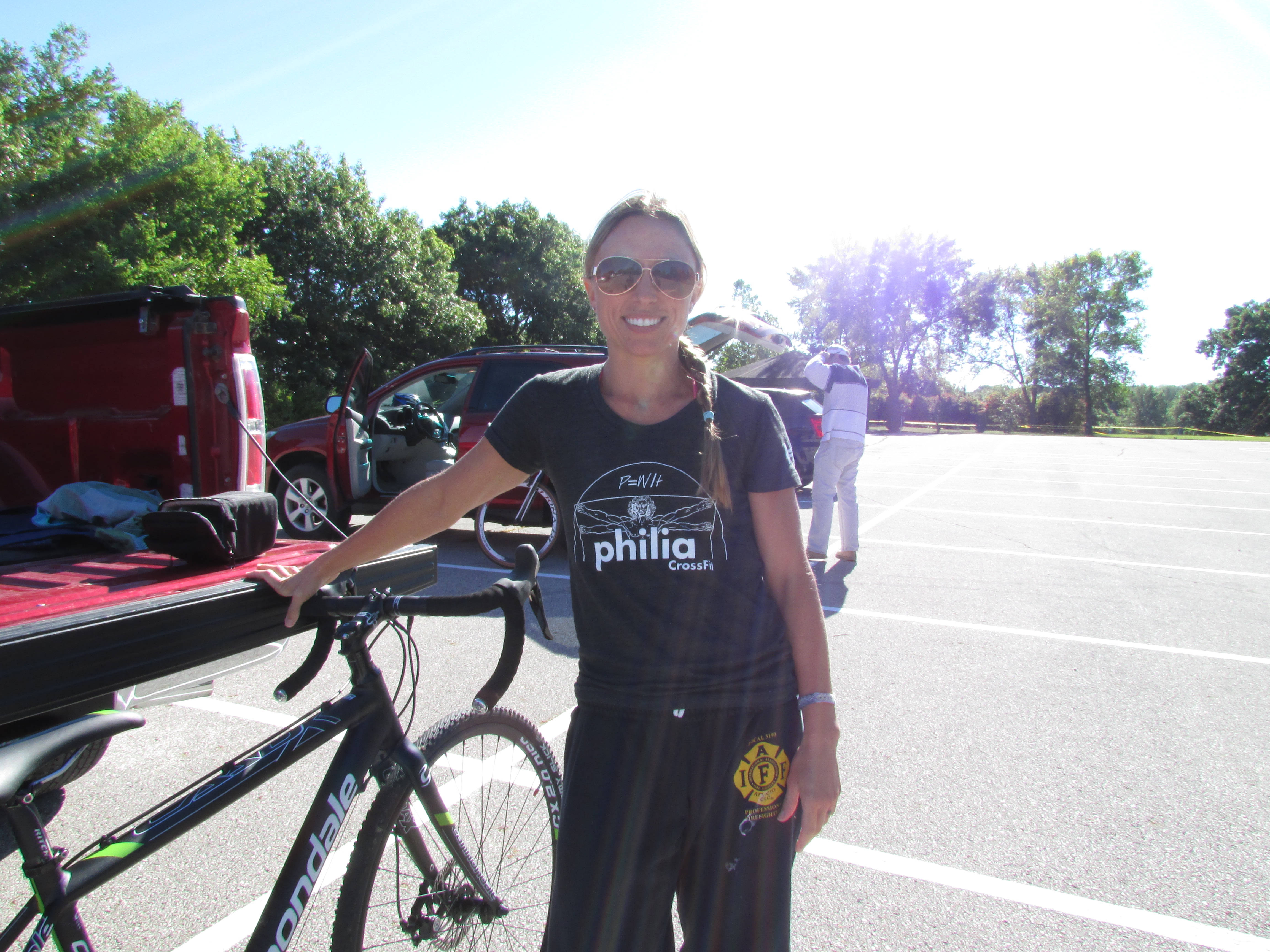 Last year I really wanted to push myself in the world of competitive triathlon. I was tired of just winging it and was looking for more guidance in training and nutrition. It was time to call in the reinforcements, so I hired a coach.

Upon first meeting Denise {aka coach} I was a bit intimidated. Even though she’s 5’4″ and probably weighs 100 pounds, she’s a badass. However, once you sit down and talk with her, you soon realize she’s the most realistic down to earth person you will meet. She’s also a mom, which means she understands what it’s like balance family and racing.

Thanks to her training and patience I was able to beat my time by 15 minutes and had a new PR.

This year I’m more confident in my training {thanks to Denise} and I’m adopting a different attitude on racing and training this year {more on that later}. However, I know some of you may be curious about hiring a coach, and how a little guidance can help.

Why do you TRI?

Well actually I don’t anymore, so the real question would be why did I TRI?  I absolutely love the accomplishment of being able to complete three sports in one.  There is nothing like the feeling you have when you complete a triathlon when you are totally exhausted with quads throbbing and being able to reflect back on all the work I put into it.  God gave us the gift of movement and I love that he has blessed me with the ability to use that movement in the three disciplines.  Oh yeah, and I can’t forget about breakfast afterwards!!!!

Now why don’t I TRI anymore?  Well simply put – I’m a competitive athlete and part of the enjoyment for me is to be at that level and now that I am a mom, Tri-Coach, CrossFit Coach and business owner, I put myself aside to work on the success of my athletes and family through sport and faith. There is just not enough time to train as hard or be as competitive as I want to for three sports.

How did you get started in coaching?

I went to Colby-Sawyer College for Exercise Science with a minor in nutrition so basically I have always been a nerd about the body.  I love the science behind what happens to the body from the cellular level out when exercise and diet is put in place.  However, I found myself in an 8 year career in pharmaceutical sales and a full time sprint athlete. This left virtually no time for God and family.

So the natural thing to do was quit my job become a full time athlete and mom, right?

Wrong, God had other plans for me. I got injured and realized that we actually needed my paycheck. So, with lots of prayers and what I went to school for, I decided to use my knowledge to help others succeed at my favorite sport in the world!  My injury also ended up being a blessing in disguise because that’s how I got started in CrossFit.  A triathlete’s brain is typically focused on only the three disciplines, “If I want to be a better triathlete I need to swim, bike, and run more!”  I was included in that equation and got an overused hip injury with a partially torn hip labrum and ischial tuberitis.  If I had a strength component in there it could have been prevented.  CrossFit is the perfect sport for that void.  Not only does CrossFit use function movements to keep me strong for life, but its core to extremity strength which is imperative for any athlete that needs cardiorespiratory endurance, strength, stamina, flexibility, power, speed, balance, coordination, agility, and accuracy. However, again my injury was a blessing to me or I would still probably be selfish. Now I get to teach athletes all these awesome components so they can be their best, and that’s wonderful to witness….I love it!

What is your coaching style?

“The athlete doesn’t chose the race, the race chooses the athlete!”

What this means is there are many times in life when people try to fit themselves in a society that doesn’t work for them and then they find themselves failing at those margins because it doesn’t work.  This happens in the sport of triathlons all the time.  People think that if they are going to get into the sport the natural progression is to start with mini sprints and work your way up to the ironman, and if you don’t make it to the ironman distance or at least half ironman then you have failed at that margin.  But truly there is beauty at every distance and my job is to guide you to your success.  If an athlete ends up picking a goal that is virtually unattainable at cost of everything else, then that could result with a bad taste in your mouth for the sport.  Athletes need to take two sheets of paper.  The first sheet should list tri goals including all your dreams and aspirations.  Then the second sheet of paper should be reality and the actual time you have to put into the sport.  Once that is established look at the distances and how much time will be needed to reach that goal. Then do it with all your strength!  The last thing you want is for your training to become a job that you have to do. You want it to be the job you want to do!

Greatest moments as a coach?

It was my first ironman client, I was nervous.  She only had 15 weeks and had only completed one Olympic distance race so far.  Initially, I told her I could guide her and give her advice for a shorter distance and then Ironman next year.  She respected my answer but called me the following week and wouldn’t take no for an answer.  So I strategically and stressfully put together the best plan I could for her.  She wanted to finish the race before the cut off period and wanted to make the run without walking.  As her training progressed she was doing great so her finish time goal kept decreasing, which was truly making me panic. So 15 weeks later, she was as ready as she could be.  That night they were airing the finishing line live and I was patiently waiting.  I still had not heard from her or saw her cross the finish line…I was sweating!  I opened up another browser page and I could see all her splits.  She did awesome in the swim and the bike and all her transition were perfect.  But where was she?  I figured she either got hurt or walked the run. For a moment I felt like I had failed her.  Within 10 minutes of that thought I got a text that said “I did it!”  She actually crossed the finish line 2.5 hours before her goal and ran the entire run portion of the race.  She was ecstatic, and I basically passed out from the stress!  I was so proud of her. She worked so hard.

What benefits do you see from coaching others?

My goal is to see my clients see themselves as God perfectly made them.  There is a lot that goes into that, but I do see it.

What’s your favorite sport in a Tri?

Hands down the bike!

No triathlons, but one of my clients got me into Cyclocross this fall, which is basically CrossFit and cycling. I can do that!  I’m hooked.  So my race calendar for 2014 will consist of as many Cyclocross races as possible starting in September!

Ummm, no but I have done two stupid things in a race.  The first one was when I was racing the Triamerica Series in Orlando. Long story short I was first on the bike and still being an amateur athlete I was sure I was going to see the person in front of me turn around. Well, I just so happened to look down at my odometer and then looked behind me only to see athletes in the far distance turning around. Yeah, so I biked the Olympic distance on the bike because there was no way in my mind that I would be first.

The second one was my last race in Wisconsin and I was crossing the finish line with some serious heat on my back.  I knew I was in placing position for my age group, however I was also injured at this time so was in some serious pain.  As I was crossing the finish line, I didn’t notice that there were two pads to cross. I stopped about three feet before the second pad and lost my third place spot. I cried before and after that race.

Who is your greatest inspiration?

My Savior is the only one who inspires me!

What to look for in a Coach?

Look for someone that doesn’t give you a cookie cutter program. Look for someone that is interested in you, and cares about your success.  Not everyone fits in the same program, that’s why we are all made different.  If we were all created the same then life would be boring, and there would only be one diet and nutrition book written.  This is what separates good coaches from great ones!

Introduction of the sport for kids?

LET THEM HAVE FUN!  Let them decide if they want to be competitive. If you’re a parent you know what that looks like.  Right now let them play.

If you would like to hire Denise to take you to the next level of racing, you can find her at TriFitAgape or email her at Shakedown77 {at} hotmail {dot} com

Hiring a coach was one of the best moves I made in my triathlon journey. Hopefully it will help you too.

2 thoughts on “Give it a TRI: Meet Coach Denise”