Once upon a time my dad had a sailboat named GRACE. From the moment he started looking at boats, he knew that would be her name. It was almost as if he had to find the right boat to fit the name.

Ironically, none of our other modes of transportation had a name. Not our car, motorcycle or even bicycle, but the boat did {as boats commonly do}.

I began to wonder WHY we name our modes of transport.

From the moment I started following the gazillion triathlon groups on Facebook, I realized that naming your bike was a thing. When I asked why, someone suggested because we {triathlon people} are just crazy. Which is partially true, because who in their right mind would pay to be tortured by swimming, biking and running all at one time.

However, I soon realized there’s more to it than that.

This year on a whim I stopped by my local bike shop over my lunch hour and bought my first road bike. She stood proud and tall, the light shimmered on her turquoise frame. Highlights of dark purple and white highlighted her sleek frame.

Her tires were skinny and her seat seemed even more so.

I worried about falling.

I worried about shifting.

I worried about everything.

I had only two weeks to get to know her – to discover her idiosyncrasies, to see what made her tick, and to find our rhythm.

Our first few rides were full of gear crunches and tire spins, but eventually we worked together.

On race day she glided up the hills and sped through the curves. Safely carrying me 15 miles across the finish line.

It was at that moment I knew we were meant to be, and she needed a name.

I of course polled Facebook and asked friends and family for suggestions. The triathletes eagerly offered suggestions while the non-triathletes questioned the need for a name.

Then I realized the WHY.

When you go into battle {aka triathlon} on your trusty steed {aka your bike} you feel a kinship with this hunk of metal. A relationship in trust is built through hours of training and racing and hauling your kids to the Farmer’s Market. She becomes part of the family, carrying you over roads, through valleys and helps you climb mountains you never thought you could possibly climb.

When she does well you compliment her and when she pisses you off you want her to know it, and yelling “well done bike.” or “you suck bike” really doesn’t have the same ring to it.

So she MUST be named.

Someone offered up this solution. 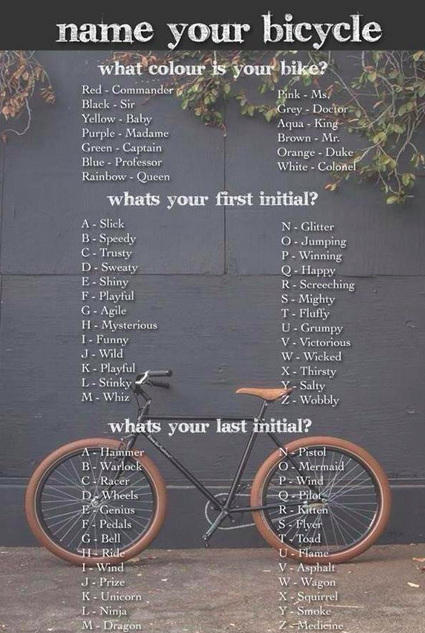 Which would make her name “King Speedy Genius”

I thought about Lexi since her style name is Lexa, but all I could think of was Sexy Lexi and I don’t want my bike to be a stripper.

Then it came to me … the perfect name.

TORQUE
{a measure of how much a force acting on an object causes that object to rotate.}

Like a bike pedal or tire, rotating in speed during a race. BOOM!

So, there you have it, the story of Torque.

Does your bike have a name?