Nausea overwhelmed me during my morning workout. The banana I had just consumed was fighting for space among the butterflies that had taken up residence over a week ago when I questioned whether I should even race this year. It was only Wednesday, my race was days way and still the anxiety and apprehension were holding me prisoner.

It’s no secret that this year’s training has been fraught with obstacles. Fear among the top contender, with lack of self-confidence a close second. My training had been inconsistent and at times non-existent. After a bout of self-doubt and battling a heaping dose of PTSD from last year’s training backlash on the family front, I was reluctant to push myself and compete.

When I voiced these fears on the internet and to my family I was met with reassurance and encouragement. However, the fear had already taken hold and it wasn’t letting go, which left me with a shaky heart, a butterfly-filled tummy and TRIbrain.

All I wanted was for it to be over, so I could do something other than swim, bike and run.

On the Friday before race-day my boss, sensing my lack of motivation and focus, allowed me to escape work and head to my race destination early.

I drove the hour south to pick up my packet and scope out the already familiar race course. I’ve been doing this race for five years, there were no surprises, nothing had changed and yet everything was different, my hands where still shaking as the race volunteer handed me my packet.

Eventually, once I started chatting with “my people” the race nerves began to subside {a bit}. I was even more relieved when I noticed my race number didn’t have a 13 and it wasn’t 666 – whew crisis averted. After I was tatted, I headed over to transition and scoped out my spot. Ironically, it’s in approximately the same place every single year. It must be fate. I took a couple of deep breaths hopped in my truck and headed to the Sherpa’s house {aka my mom’s} 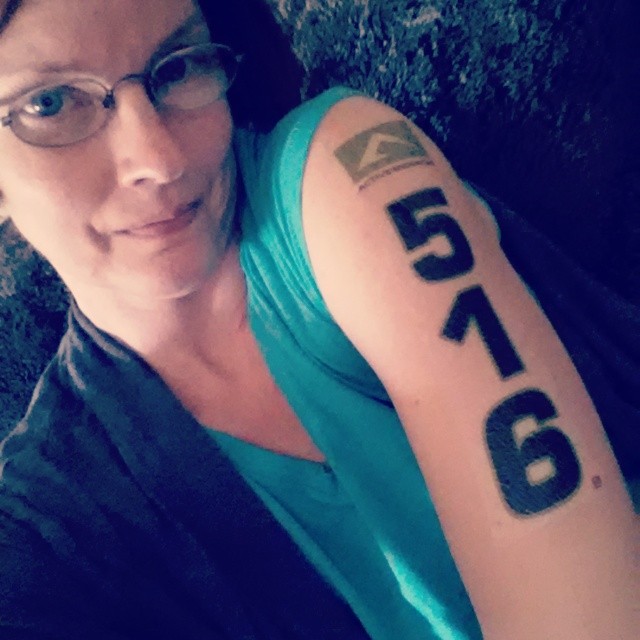 Each year, since she moved to the Quad Cities my mom hosts me the evening before my race. She makes me pasta and a salad, we talk about mundane things to abate my nerves and then she wakes up with me at the crack of dawn to cheer me on. 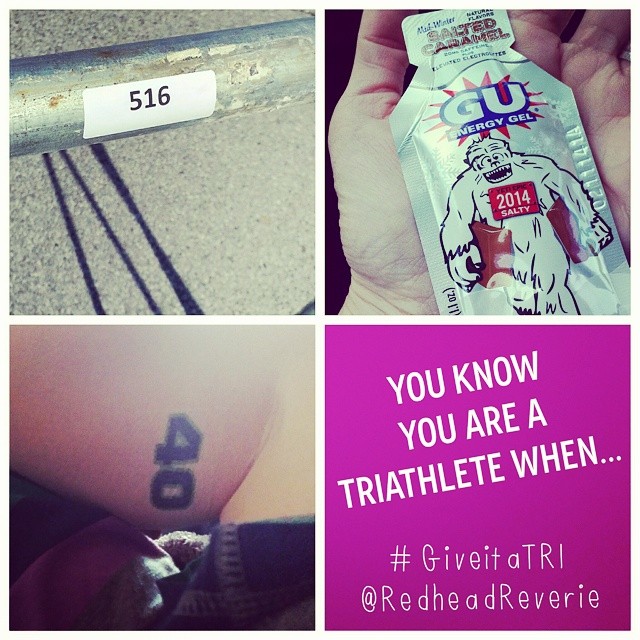 That evening I was more restless than usual, and after a fitful night’s sleep I woke up at 4 am on race day grumpy and groggy. Oh, and freaking cold.

It was the middle of June, but it was freezing {according to me}. A balmy 50-ish degrees outside. Luckily I had my Team Pink Betty sweatshirt, but I had to borrow my step-dad’s sweat pants. Not the most attractive, but they did keep my shivers from being too overwhelming.

Oh, yeah. Did I forget to mention that when I’m super nervous my entire body starts shaking and my teeth start chattering. I look like I’m suffering from hypothermia. Cold temps only exacerbate the issue, which made race morning pretty interesting.

With shaky hands I applied my race number stickers to my bike and helmet, swung my bag over my shoulder and told my mom I’d see her in the park.

Due to the fact that it’s a closed race course {meaning no cars allowed} we opt to park outside the park, otherwise it would be hours before I’d get my post-race pancakes and trust me you don’t want me to wait hours.

Biking into the park also gives me some time to warm up, focus and settle those rambunctious butterflies.

I arrived at transition and again with shaky hands, began the task of unpacking and setting up my area. Hydrating came next. I learned my lesson about hydrating early and often after last year’s cramping issues during the swim. Calf cramps suck, and they also make it impossible to swim.

This year instead of visiting with my mom, I stuck close to transition. Visiting with other triathletes and just chilling. I ran into a few fellow Bettys, and some other folks from SBM and triathlon FB groups. It was nice seeing some familiar faces in person.

About this time my shaking and chattering were driving me nuts so I opted to put my wetsuit on early in an effort to warm myself up. It worked well until I headed to the water. I have to tell you there is nothing worse than that first moment when your nice warm wetsuit fills to the brim with ice cold water. It makes you want to drop a few thousand f-bombs. Although it’s quickly alleviated by peeing in your wetsuit…oh wait was that TMI…just ignore that part. 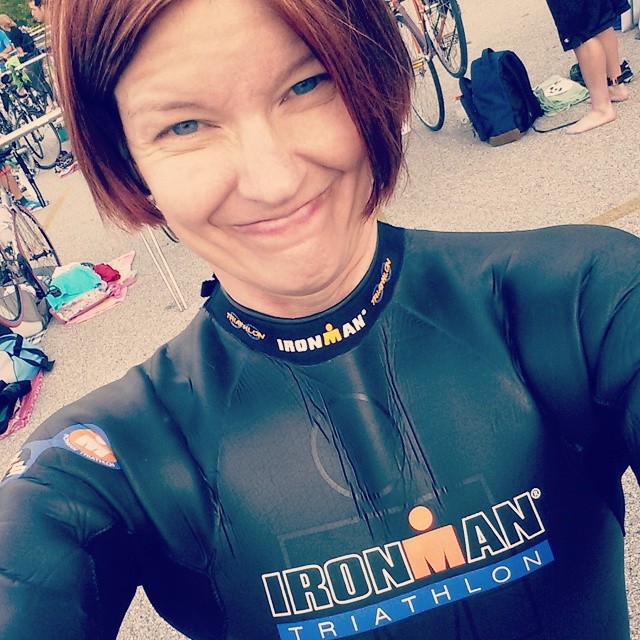 When I lined myself up for the swim, I mistakenly placed myself in the 9 – 10 minute slot usually I place myself in the 13 – 15 slot. Oops. I ended up getting a bit battered, but it wasn’t too bad.

Prior to my race I was easily swimming 300 – 500 straight, which is a big deal for a girl who just re-learned how to swim only a year ago. However, the moment I was a quarter of the way in the water, old habits returned and I couldn’t put my face in the water. I spent half the swim doing the breaststroke and the other half doing the bear crawl. I was pissed! Obviously I need more OWS practice.

About three quarters of the way through the swim I started to get REALLY tired {remember restless night of sleep} and I almost said, “Screw it. I’m going to just climb in one of the boats and go for pancakes.” I quickly fought through that mind bender and plowed forward.

Usually the bike portion is where I’m footloose and fancy-free. However, as I mentioned this year was different.

After my should I or shouldn’t I race meltdown, I decided that if I’m going to race I’m going need a race bike. So, on a whim two weeks before race day over my lunch hour I bought a road bike. We had only two weeks to get to know each other and I wasn’t feeling confident about our new relationship. Hill climbs were tougher than I thought they should be and I was paranoid I’d throw my chain with each gear shift. {note to self watch a YouTube video on fixing a thrown chain} 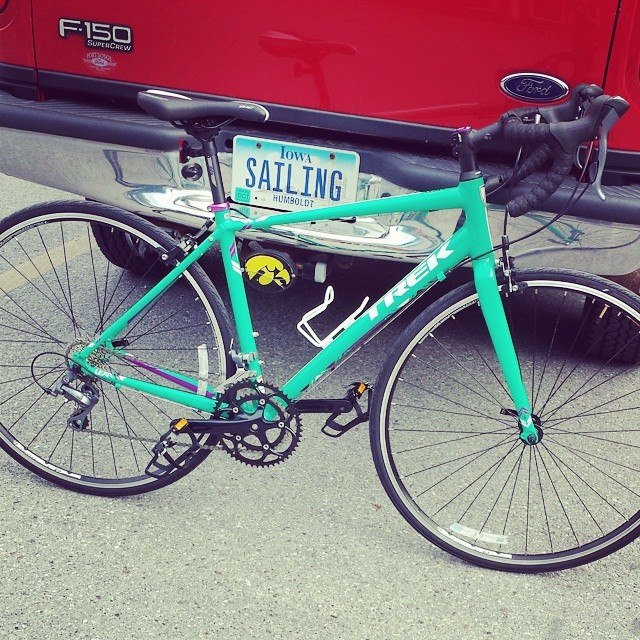 I shouldn’t have worried for my girl and I got along just fine and even with a headwind we still made good time.

By the time I hit the running trail I was in full happy endorphin mode. Then I realized they changed the running course, and I had to run on gravel or what felt to my feet as large boulders. Paranoia struck and my pace slowed as I fretted about rolling an ankle. Thankful it didn’t last long and I was off running into the glorious day. Along the way I heard a few “Go Betty!” which is so funny because people probably thought my name was Betty. The moment I slapped the tire of the John Deere tractor I knew I was almost there, ready to cross the finish line.

There is a point in this race where I ALWAYS sprint. Even if I feel like my lungs are going to explode and my legs will fall off I sprint. It’s the best piece of advice I can give to anyone racing – ALWAYS SPRINT TO THE FINISH. Every time I pass at least two people, which considering my run is as slow as a snail, makes me feel pretty awesome, it makes for great photos and best of all you FINISH STRONG.

“It’s not how you start, but how you finish.” The best quote I’ve ever heard and I always remember it.

“And crossing the finish line is Brook Easton from Iowa City,” with that I was done.

Another triathlon was in the books. I had conquered my fear and won.

Then I remembered our race director, Eric Sarno’s email the day before….

“What stands between you and your race goals on Saturday?

For some it may be nothing, maybe for others it is fear, stress, anxiety, uncertainty, a nagging injury, lack of training, in-experience… Let\\’s just refer to all of it as “stuff”.

When your feet touch the ground for the first time on Saturday morning, I believe that this Stuff will say, “OH NO! THEY ARE-UP!” I believe that this stuff, will say, “They are up! Even though I did my best to get in their way… they are up! And they are coming to the starting line!” As you stand on the beach ready to start, that stuff will have been kicked in the face, and when you cross the finish line, that “stuff” will have been destroyed!

DON’T LET THAT STUFF GET IN THE WAY OF WHAT YOU CAME HERE TO DO!

Thanks Eric I totally kicked all that “stuff” in the face and destroyed it!

I appreciate all the love, support, Facebook messages, voice messages and encouragement during my race and in the weeks prior. You – my friends, my husband and kiddos, the Sherpa {aka mom}, the GoTRIbal team, Team Pink Betty and the SBM family all crossed that finish line with me without all of you there wouldn’t have been a race day – THANK YOU.

My mom, who captured THE BEST photo ever {see above}, greeted me at the finish line with a hug and as always she read my race time, because I just can’t bear to do it.

As I headed to transition I listened to my messages. Tears welled in my eyes as I heard my husband and the boys wishing me luck on my race, and Little Red yelling “you’re going to win mama.”

Oh, buddy I already have.