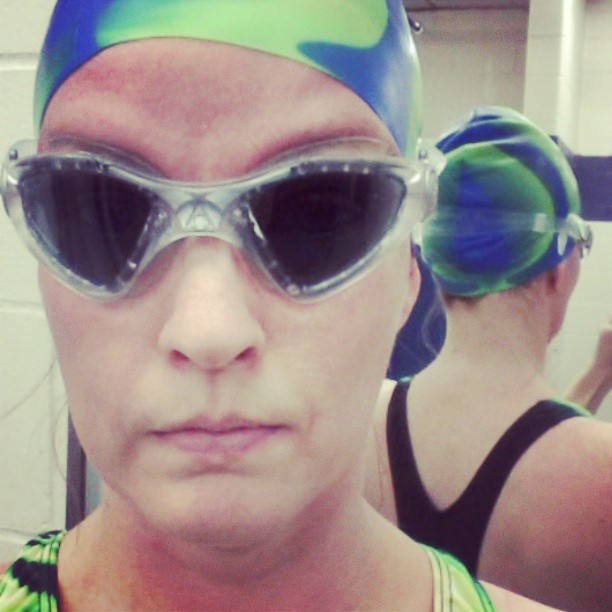 I entered the weekend EXHAUSTED ready for a break, and not looking forward to the weekend. Work obligations had made me bitter and owly, but how quickly things changed. Appointments were cancelled and a generous boss offered to fill in, so I could spend time with my family.

I re-entered the weekend GRATEFUL, that life has a way of working itself out.

I entered the pool on Saturday morning an ATHLETE. Paddling my way through the water trying to coordinate each stroke with a breath.

The water again washed the stress away and as my body became weary my mind felt alive again. Unburdened from the exhausting week.

I entered the house to GREETINGS from little voices, “Hey mom, look at this” and “Hi mommy”. It was music to my ears. We played games, and watched movies. Never once worrying about being somewhere with things to do.

He entered the house after being gone for three days, and we greeted him the same way, with giggles, Hi daddy” and tackle hugs.

I entered Sunday ready for a ROAD TRIP to Mimi’s house. It’s been a while I told the boys, and they cheered “let’s go!” and go we did.

We entered Mimi’s house with RECKLESS abandon, searching the “special toys” and the cookies that were always ready for little hands. Talking, laughing and telling stories of the weeks gone by.

The four of us TENTATIVELY entered the Children’s Museum, clasping hands unsure of where to go first. The boys were shy, and stuck close to my side … for all of five minutes before jumping in feet first to make pizzas, play with toy boats, sort eggs, ride the combine and play grocery story. I watched them run back and forth, back and forth between all the stations, gobbling up playtime like it was the last cookie on the plate.

We re-entered the QUIET confines of Mimi’s house. Returning from our adventure, tummies were growling and eyelids were heavy. We ate mini cupcakes smothered in chocolate icing with a side of vanilla ice cream. Forbidden treats at home, but glorious snacks at Mimi’s.

The two boys and I entered the car, one begging to play Angry Birds and the redheaded one flying a foam airplane. Me driving and singing along to the radio to avoid sleep as my foot weighed heavy on the gas pedal in the rush to get home. Only 15 minutes from home and I hear snoring from the backseat the redheaded one had succumbed to sleep. 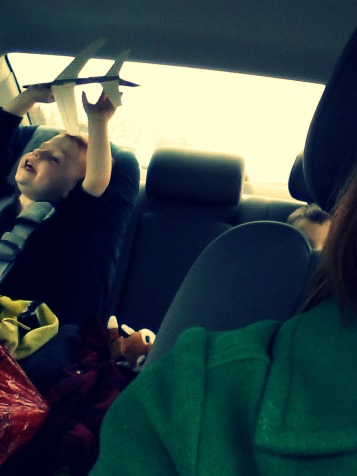 I entered the house with a GROGGY redheaded boy and a FAMISHED five year old. I was on mom duty and I was spent from the day’s activities. My consolation was that I had one more day in this weekend. One more…

I entered the preschool the next morning STOMPING the snow from my boots and tugging and little redhead behind me. He couldn’t understand why he had to go to school and the big boy got to stay home. Life isn’t far little man. I said my apologies, showering him with hugs and kisses promising to make it up to him.

The snow fell heavy as I entered the gym, and upon learning that I forgot my bike to train, I fought the snow and re-entered the gym a half hour later ANNOYED with myself.

I entered the ZONE as I began pedaling the bike. Imagining the race, the hills the finish line. It’s those images that keep me motivated otherwise the snow outside and my exhausted brain would say “forget it.” But I persevere and 20 minutes later I’m done.

My soul heaved as sigh of relief as I entered my chair. Cuddling under a blanket we sat and watched a movie together as the snow fell and wind blew outside our window.

We left our cozy confines and entered her home. Little boys were eager to play as moms talked about mom things like fonts, colors and bikini waxing. After juice boxes were drank and foam bullets spent we said our good byes with promises of more playdates to come.

They entered the house like a herd of elephants and I sat back and watched, reveling in my THREE whole days with those I loved, doing what I love and being who I love.

And I enter this week with a full, yet heavy heart. Longing for more days like these.

3 thoughts on “I Entered: Scenes from a Three Day Weekend”