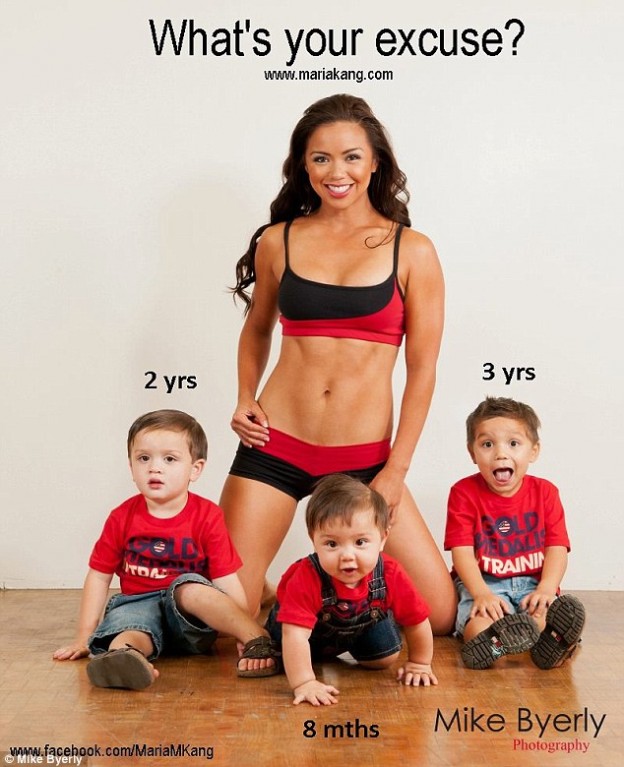 Well, it’s been all over the news, internet, social media and in my spin class…that woman baring her six pack abs with her three kids.

{I hate even adding the photo here, but in case you were living under a rock and didn’t know what I was talking about, here’s a visual.}

I have no issue with her really, but her message sucks.

First of all she’s a fitness model. Ummmm….yeah COMPLETELY unrelateable to most moms. I don’t personally make money from having six pack abs, but even if I did they wouldn’t look like that. Everyone’s body is different and I’ve NEVER had six pack abs even when I was anorexic.

Secondly, at what point do we start shaming each other in order to encourage each other. Even if she wrote something like “If I can do it so can you” it would have been better than “What’s your excuse?”

It all goes back to my previous post on the fine line between Fitspiration and Thinspiration. If we are pushing ourselves past our breaking point that isn’t a good thing. It’s this mentality that has tween girls pinning images of rib cages poking through translucent skin and obsessing about thigh gaps.

I get a little ticked off {if you can’t tell} about things like this, because as women we just seem to dig the knife in a little deeper with each back handed comment. We can’t seem to stop ourselves.

Ladies, for real, this isn’t a competition we are in this together. We might possibly rule the world when we can STOP shaming and START encouraging each other.

If you can’t be encouraging then keep your abs and your comments to yourself.

Use that energy to start an online support group for women with eating disorders, or encourage your friends on their fitness journey or just be present for your family.

You may not get as many twitter followers by portraying a positive message, but you might just inspire someone and that’s better than any social media stat.

So let’s stop the shame and start encouraging … because life is too short to be so damn negative.

2 thoughts on “My Perspective: Stop the Shaming”