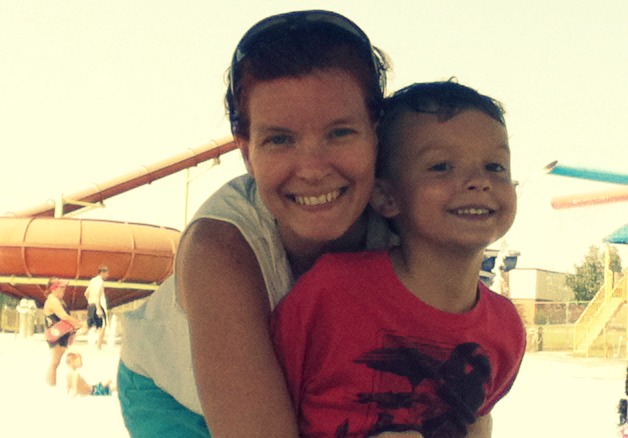 I sat on the edge looking down at him smiling and thinking “wow he’s so big”. He was jumping off the edge next to me. With reckless abandon he would hold his nose and plunge straight into the chilly, crystal blue water each time popping up with a smile bigger than Texas on his face. I was in mama heaven.

Last year, he barely swam alone. He clung to me like a kitten clings to its mama, too scared to take the plunge.

The water was freezing. I tentatively popped a toe into the icy water and quickly pulled it out. I just sat there for a while basking in the warmth the sun and my son’s smiles. After a while he urged me to join him. “Jump mom jump,” he yells. “Don’t be scared. It’s cold at first but you’ll get used to it.” Such wise words from such a little boy, but he’s not little anymore, he’s getting bigger.

Eventually, thanks to his encouragement I dive into the water. The cold rushes through me quickly and as I make my way the surface I’m greeted with more smiles and a high-five.

At that moment I no longer feel the frigid water, all I feel is the warmth of his happiness.

We soaked up ever last golden bit of summer yesterday. The last day of summer faded into dusk and was over…

This morning we played and giggled just like any other day, but today is different it is the first. I can’t deny that butterflies were dancing in my belly the entire time allowing the worries to enter my brain.

Will he have fun?

Will I get a phone call?

So many worries all wrapped up in my brain and together with my tummy butteflies they created a swirling, whirling mass of chaos.

“STOP! STOP worrying. You are getting too far ahead of yourself just soak in the moment like you did that last day of summer,” I yelled in my head.

I made him stand on the front porch for his first day picture, and I asked him what he wanted to be when he grew up. “A green ninja of course,” was his firm reply. I giggled knowing that only a boy mom would get that reference.

Then it was time, we drove part of the way then walked, crossing the street with trepidation and under the guidance of the friendly crossing guard.

He tried to play and talk to his friends, but I could tell he was thinking and the butterflies were fluttering. He grew quiet and just sat observing the landscape, soaking in his surroundings, the people and his feelings.

But I had to be brave for him. I needed to return the encouragement he gave me only the day before. The moment HE told me not be scared and just JUMP.

So I held his hand tightly, and when it was time I let go and whispered in his ear JUMP! Because he is braver than he realizes, and he’s got this.

It’s time for him to take the plunge.

One thought on “Scenes from My Life: Lasts and Firsts”