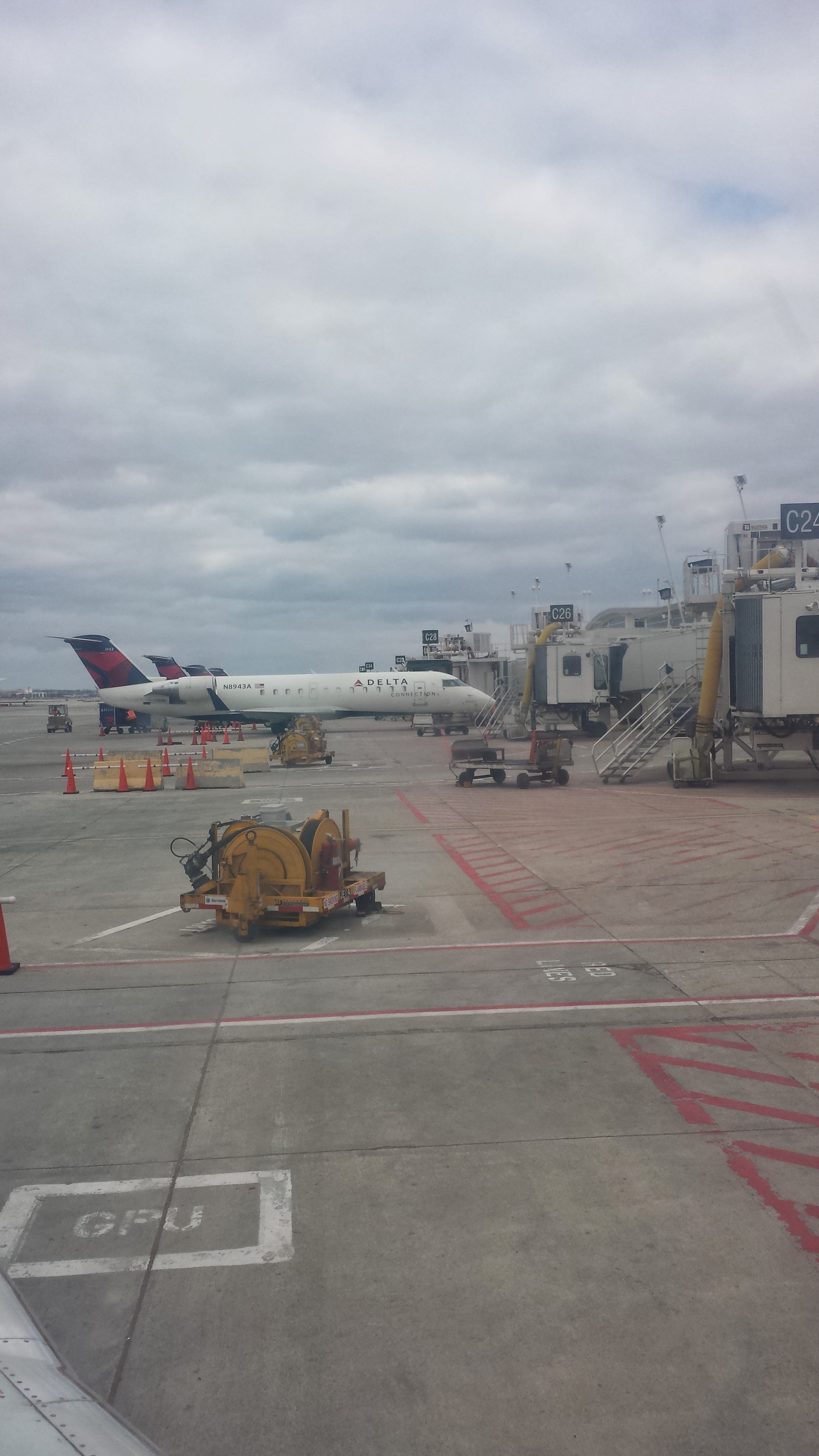 A couple of weeks ago I flew on a plane.

I know this doesn’t sound funny, or earth shattering, but for me … well, let’s just say I’m a walking sitcom with my own laugh track {or maybe there really are people actually laughing at me} Whichever the case I’m sure I looked like a total idiot when I boarded the plane last week.

I tried to look normal.

I planned my outfit down the tiniest detail, wearing jeans instead of yoga pants, layers, so when I overheated I could do my airplane strip tease and lots of deodorant because I ALWAYS get nervous going through security.

Which, after this trip, is completely justifiable.

The airport in my town, actually a half hour from my town, is tiny – miniscule in comparison to say O’Hare or even St. Louis. There is only one building, and it’s all pretty straight-forward even for the directionally challenged like myself.

I arrived at check-in, nervous as hell, God only knows why. Perhaps I just constantly feel guilty in an airport like I’m going to inadvertently say the word “bomb” and immediately be ushered off the plane and subjected to a strip search.

I can barely handle the self check at Wal-Mart and now they want me to do this?

Well, shit! Cue rivers of sweat in my armpits.

The kiosk is basically a demanding SOB who asks loads of questions.

Well, I’m not sure as the print on the piece of paper is the size of a flea, and I don’t have my six year old to read the numbers for me. Luckily, I had JUST bought a pair of readers and they were in my bag…somewhere.

Rummaging through my bag, the skinny jeans that I thought were so well planned decided to dip below my waist and I mooned the 70 year old gentleman next to me. When I stood up, readers in hand, which were in a pocket I checked THREE times, he smiled at me. I guess he liked what he saw.

After I was confirmed, and said “no” to carrying anything suspicious. Who would say “yes” to that anyway?

I made my way to security.

By now I’m ready for a strip search, because my whole body was one sweaty mess. No I don’t look guilty at all.

I preface my security debacle with this…

This is the first time I’ve flown in 6-ish years.

That being said I did everything wrong.

I packed my carry-on so tightly I couldn’t get my laptop out without dumping the entire contents of my bag.

Also, I guess a box of protein bars may or may not resemble bars of explosives, which I should know since I’m an avid fan of action movies.

And…leaving your car keys in your back pocket gets you a nice butt pat by the TSA officer. Unfortunately or fortunately however you want to look at it, it was a woman. Since my keys were so suspicious, I was also subjected to the hand swab and for a split second I ran through my head if I had touched explosives that day. Luckily I hadn’t.

After all that, I repacked my bag, and made my way to the gate. I was a sweaty frazzled mess.

I settled in to cruise Facebook at which time I panicked realizing my phone charger was still sitting on my nightstand. Cue more sweating.

As we boarded the plane, I was unsure what to do with my carry-on bag. I did mention it’s been 6 years since I’ve flown, right?

Did you know they have fancy little luggage holders for your carry-on bags?

I didn’t…I also wasn’t sure how it all worked. So, like I always do in situations like these I copied the person in front of me.

Load bag onto the rickety metal shelf and boom it’s stowed under the plane.

Very similar to a Greyhound bus I rode white knuckled as a teenager. This concept is great since I can NEVER lift my carry-on over my head, and since the overhead compartment is so tiny it wouldn’t even fit a magazine.

However, little did I know that in my feeble attempt to place my bag on said fancy little luggage holder that the weight of my “purse” would tip me over and I would end up sprawled on the ground with my pants falling around my backside yet again. A nice man asked if I was ok, and I mumbled something like “yeah, whatever”. Thinking in my head that if this many people were going to see my underwear today I would have worn the nice ones, instead of my granny panties.

I made my way to my seat, and discovered that the only person who would be comfortable on this teeny tiny plane is my three year old. It was so small a few of the vertically blessed had to duck their heads in order to board.

Once in my seat, I firmly placed my Ear Planes in my ears and prepared for my brain to explode. My head doesn’t handle the pressure of flying well, and these little ear gadgets help. It’s also the perfect deterrent for the small-talker in the seat next to me.

I made it to my first destination frozen and with a the jean seam etched into my tender buttocks from sitting in a seat the size of a preschool chair for an hour.

Thankfully I had an uneventful layover in Detroit.

My trip went wonderfully, and 24 hours later I was back at the airport ready to head home. I was more confident, “I’ve got this,” I boasted.

My readers were ready and waiting for the kiosk inquisition.

Laptop was out and ready for inspection.

I had to walk through security without socks, which TOTALLY grossed me out. I wanted to rush to the bathroom and give them a nice Silkwood shower.

Which meant I started sweating…and then my bag was flagged AGAIN!

Ok, I will admit I tried to sneak on a small itty bitty bottle of wine. For a moment I thought I was busted.

“Oh, it’s just protein bars,” I explained to the agent.

After fondling through my undies {note to self DEFINITELY bring the nice ones next time} Who knew they would get so much action? He confiscated my favorite shower gel and toothpaste, which I should add made it through the first time. Uh Oh…

Luckily he missed the wine. Whew!

After nice long wait, I made it on my plane headed to Atlanta for my layover.

Have you ever been to the Atlanta airport?

It’s big and scary, and there’s a train. A freaking train in the airport like a subway.

I didn’t know about the train, and thought over-confidently that I was going the correct way down the concourse until it ended and there was no “D”. It just didn’t exist. Upon turning around and looking up I see an arrow pointing diagonally saying “trains to concourses B, D, E and so forth. UGH…I resisted the urge to run, because running in an airport will most likely be the best way to receive a strip search.

After missing the first train and being talked off the ledge by a nice airport helper, I caught the next one and made it safely to my gate.

I boarded the plane WITHOUT mooning anyone this time and finally made it home.

So the next time you fly remember this…

No matter what happens to you in the airport, or how much you sweat or look like a total fool, you will always make it home.