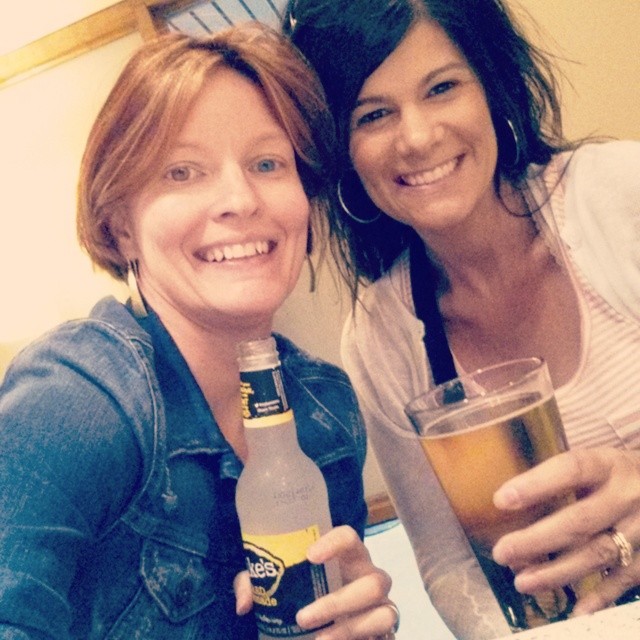 This is long, but if you are looking for a great getaway you will want to read it, and no it’s not a sponsored post.

Our bags were {over}packed, and as storm clouds threatened I stood in the driveway shifting from foot to foot looking like I was about to pee my pants waiting for our friends to arrive so we could catch our plane to Florida.

This is only the second time we’ve taken an extended trip without the boys.

I can’t deny the fact that I was glad we were going solo. The boys are great {most of the time}, but sometimes it’s nice to relax without worrying about naps, feeding pouty mouths, hearing “mom, mom” fifty thousand times a day, defusing temper tantrums, dispensing meds, stepping on LEGOS … the list goes on and on.

Can you tell we needed a break?

Once we reached the airport bar I was ready for vacation. Luckily I didn’t moon anyone at the airport this time, but our Clearwater adventure did have a small hiccup. Remember the storm clouds I mentioned at the beginning, well it turned into a pretty wicked storm. We ended up sitting on the plane for two hours waiting it out, which meant my bladder sat for two hours with booze percolating inside it, which also meant I had to break my long-standing rule about using the bathroom on an airplane.

I have a very large phobia about this, because I once read that a woman’s guts were sucked out by an airplane toilet. I’m sure Myth Busters proved it was truly a myth, but I can’t deny that as I sat on the little, teeny, tiny toilet the thought popped into my head and I didn’t linger too long in there. The jury is still out on which is worse an airplane bathroom, or the porto pottys at the triathlon.

As a friend kindly pointed out at least I can just pee in my tri-shorts, on a plane not so much. There you have it.

Once my bladder had expunged the alcohol I consumed earlier, I was able to settle in with the hubs and watch a movie while we jetsetted to our destination.

What felt like a gazillion hours later we were finally in Clearwater.

We checked into the Hyatt Clearwater, which is gorgeous, and didn’t have the accoutrement of home. Like toys strewn across the floor, dirty dishes in the sink or laundry in baskets waiting to be folded. 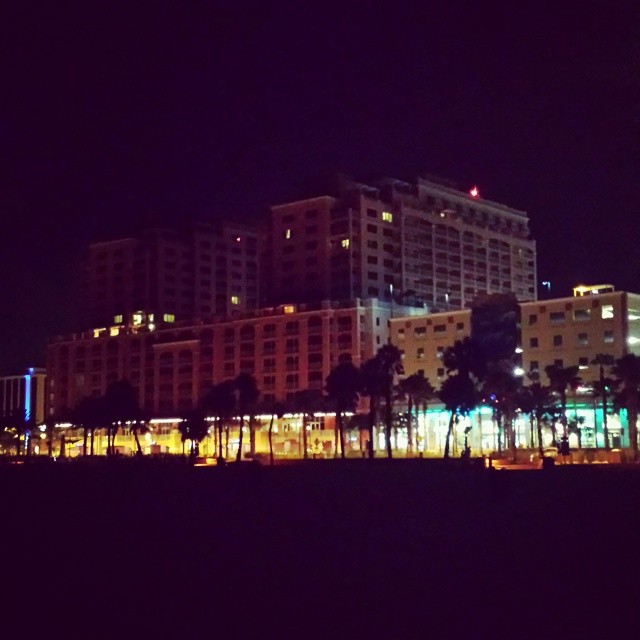 Instead it was immaculate, with a view of the ocean, and a kitchen with no dirty dishes and a HUGE bed for just us. I could have stayed in there forever, but my stomach was demanding food so we set off with our friends to find a place for dinner.

There weren’t many choices, but we were lucky that Crabby’s Bar & Grill was open. It was at that point after eating fresh crab cakes I decided was going to eat my way through Clearwater.

Hyatt hotel, yummy eggs and ask specifically for cranberry pecan toast, it is awesome. I could have eaten a whole loaf.

The Café Beach Shanty was a cheap, yummy breakfast. I had French toast, eggs and bacon both days. 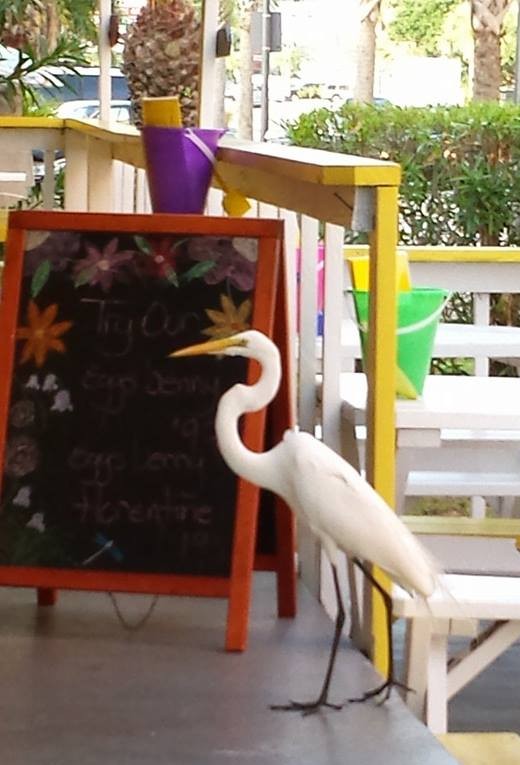 Because we were so laid back, sometimes lunch was only a snack, but I couldn’t let the trip go by without eating the famous Super Grouper Sandwich from Frenchy’s I’ve never had Grouper before and it was pretty tasty, and the sandwich was BIG! 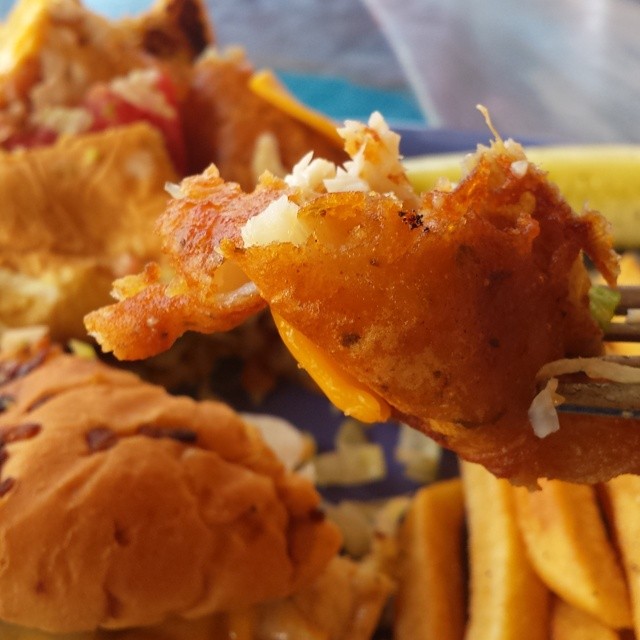 Ok, so don’t judge, but we went to Hooters. Yes, the girls wore hot pants that made me nervous about hygiene and some of them gave me boob envy, but the chicken was good, so there. Plus you probably didn’t know this {or maybe you did} but Clearwater houses the ORIGINAL Hooters which was also founded by a couple Iowa natives. I guess Iowans like boobs and chicken go figure.

Hands down go to Crabby Bill’s and get the Crab legs. I wish I would have taken a photo. They were HUGE, yummy and messy. I even tweeted that a Silkwood shower was in order after eating those. We ate at Crabby Bill’s twice and the second time I ordered shrimp, Mahi Mahi and there were a few Conch fritters on the side. It was my first time for Conch fritters too and they resembled a much tastier version of the hush puppy. 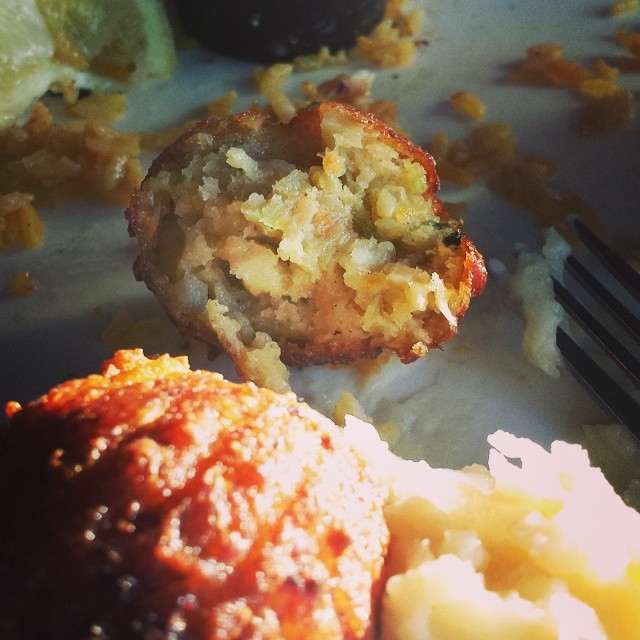 Dining can get pretty expensive pretty fast, especially when you add alcohol to the bill. Luckily all the rooms at the Hyatt have kitchens with microwaves, stove tops and full size refrigerators, so we bought some groceries at Surf Style, a grocery store / souvenir shop. I couldn’t resist picking up a t-shirt or two along with our munchies.

Next up, what to do?

Well, I have to say that sleeping in was high on my list, but it was so stinkin’ gorgeous along the beach it was hard to linger in bed. A ritual transpired each and every time we left the hotel.

It’s a good thing we did too, because for some reason there were small bits that I forgot to cover, like my thighs or under my swimsuit strap, and my head. I ended up with a weird tan / burn thing going on. 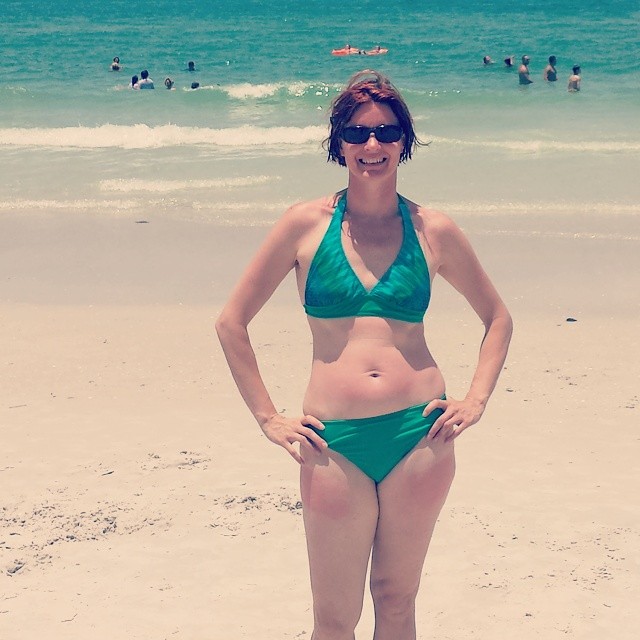 My husband and I thoroughly loved the beach. We were obsessively collecting shells for the boys, and trying our best to find a full sand dollar, even downloading an app that would tell high tide and low tide. My favorite part was just walking the beach with him during the early morning trying to find the perfect shell.

There are some rules about the beach that you should know.

Unless you want to recreate the scene from The Birds, don’t take food to the beach. The seagulls are relentless and bold. They will snatch food from a table, chair or hand. We watched as they terrorized a poor five year old boy who was running down the beach with a chip in his hand.

Sand gets EVERYWHERE. Sitting on the beach is relaxing, and you don’t realize you have a sand castle in your bottoms until you get up and head to your room. Ouch!

You have to pay for the cabanas unless you are like us and sneak off to the ocean every time you catch a glimpse of “clipboard guy”. Don’t judge we were only at the beach for an hour or two and spending $25 for that seemed ridiculous. 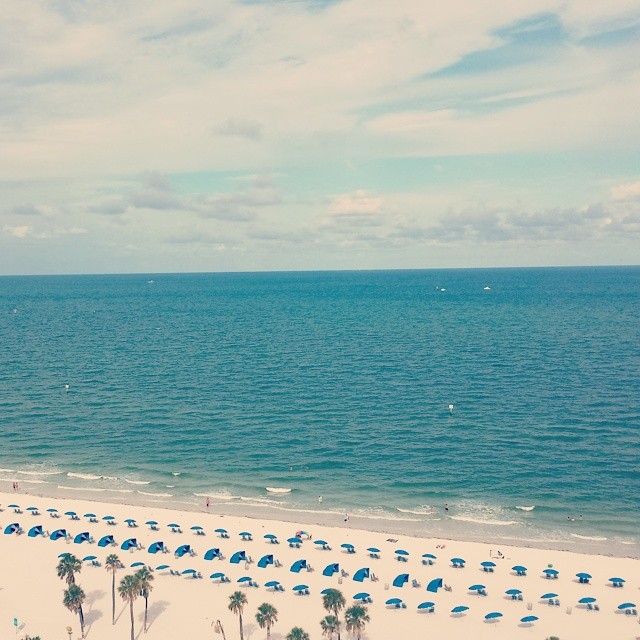 Swimming is hard in the ocean. I tried to swim some laps, but due to the fact that my goggles were capturing salt water and I was also drinking it. My “swim” didn’t last long.

Sometimes you might see some marine life. We were lucky enough to see a dolphin while we were out on Pier 60. It was pretty close to shore and it was magnificent watching something that I’ve only really seen in an aquarium or on TV. My first thought was “the boys would love this.” 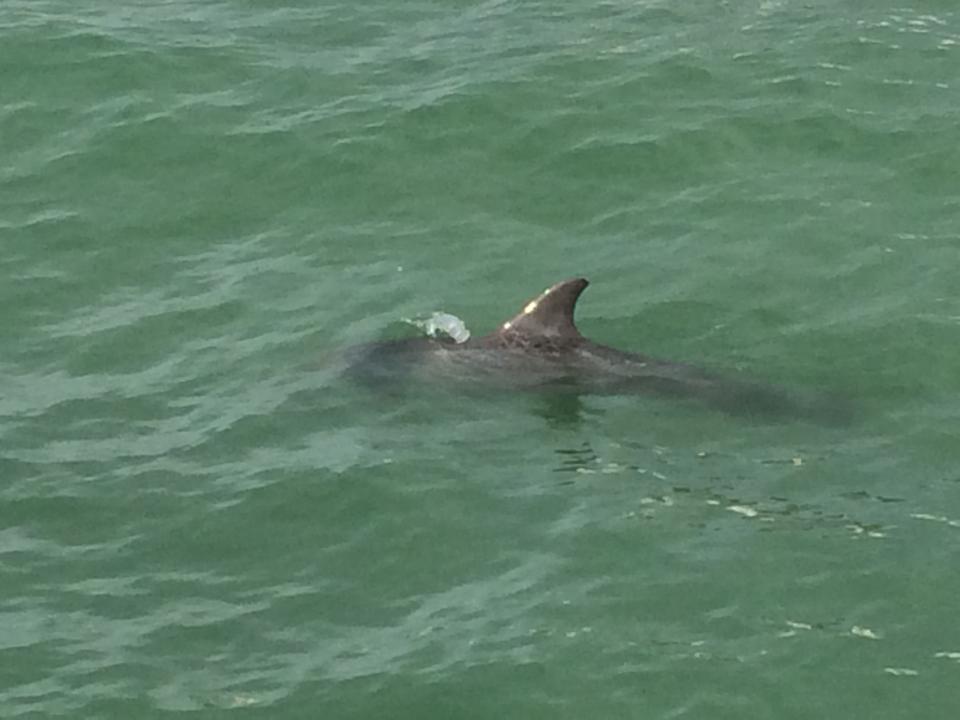 Also, during high tide small clams {like the size of a finger nail} wash up on shore, and you can watch them quickly bury themselves in the sand. I tried to get a video of it, but they were just too quick.

The fun continued off the beach too.

We wanted to tour the island via water, so a boat cruise was on the itinerary. Of course it couldn’t be any old boat cruise; it had to be Captain Memo’s Pirate Cruise. We had a good time enjoying drinks on the deck and watching the water roll by. The crew is great and they have activities for little buccaneers, so parents can have a relaxing boat ride. This was the second time I said “The boys would love this.” 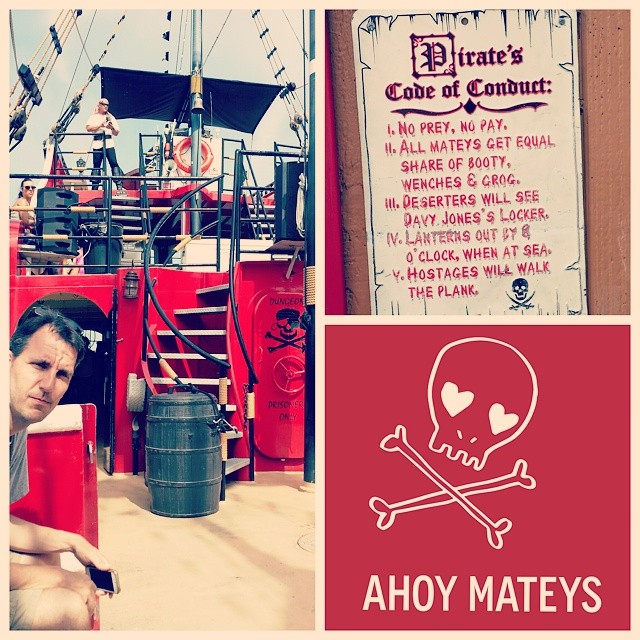 Before we left for our trip, we had talked about parasailing. It has been on my bucket list FOREVER and I really wanted to do it. However, is it really wise to do it {parasailing} with your husband? What if both of you plummet to your death and your children are left as orphans? Yes, those are the thoughts that run through my head. 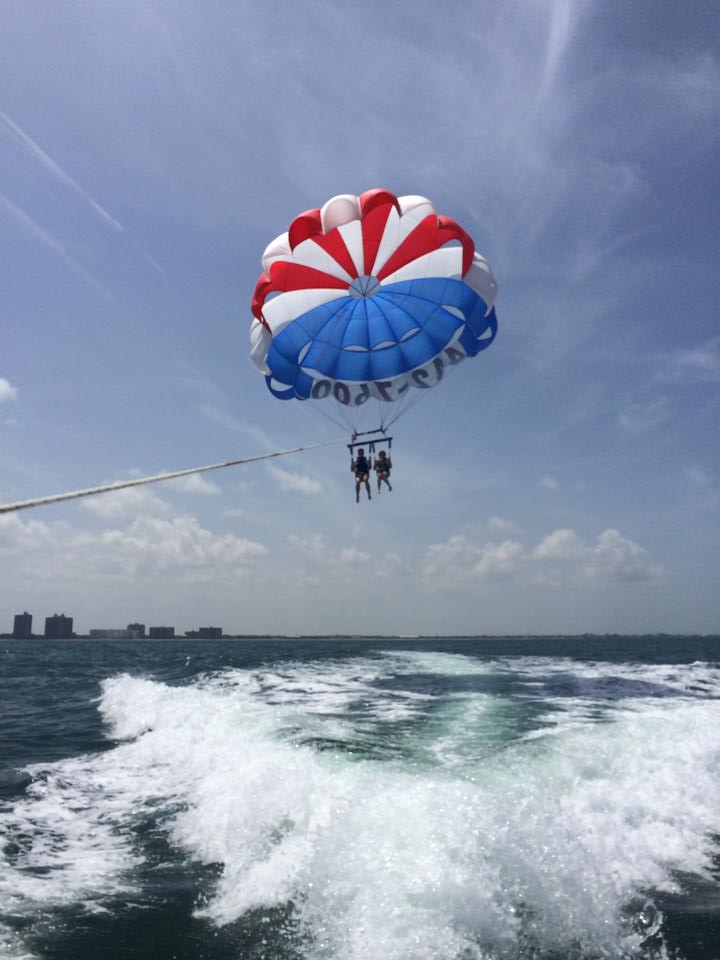 But once on the boat and ready to fly there was no one else I would have rather been with. Other than the fact that he tried to swing his legs {crazy man}, it was nice flying high with the hubs. Supposedly a manta ray jumped out of the water right under us, but I was too busy watching the boat to notice, bummer.

It was a once in a lifetime experience. 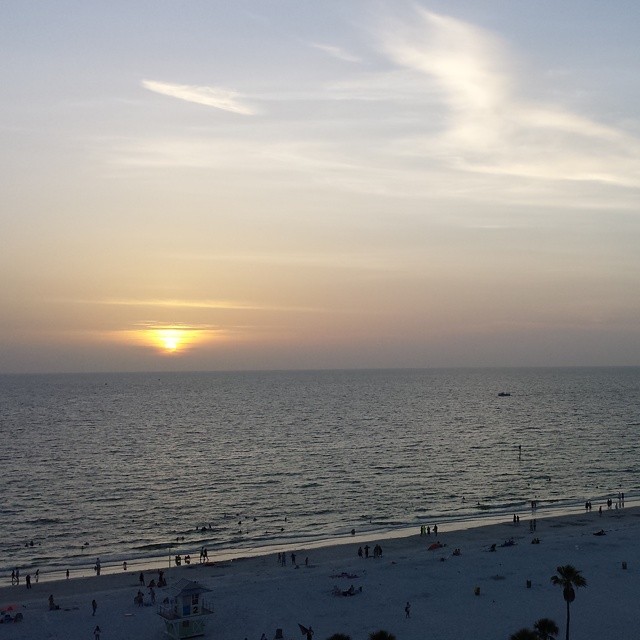 Seriously at the end of the day when you can stare at this, it’s perfection.

We returned home four days later, on an uneventful flight, to two boys who were so excited to see us I almost fell over when they rushed me at the front door. That’s perfect too even without the beach and with the LEGOS and laundry.

For more photos of our trip search #Redhitsthebeach on Instagram

2 thoughts on “Scenes: A Trip to Clearwater Beach {#Redhitsthebeach}”