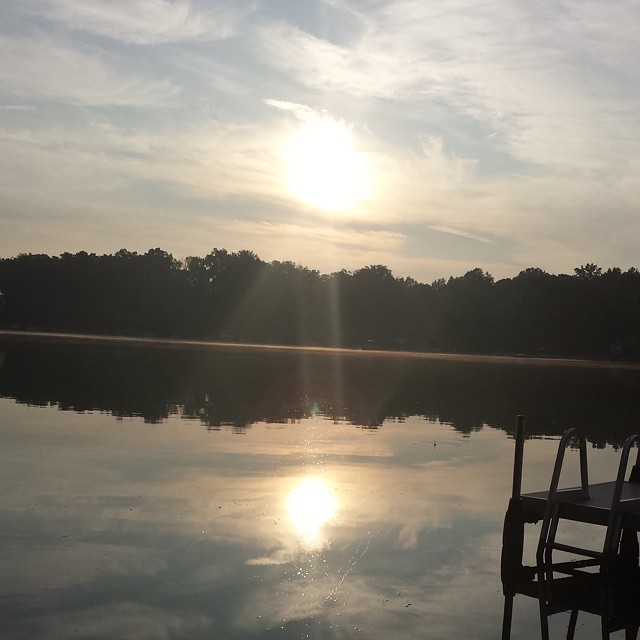 I gaze tiredly out the window of the truck as we cruise down the road toward home. It’s been a long week and a long day. Seven hours in a car with two boys can make two parents go a little bonkers.

My mom had warned me, “I hate to tell you this, but family vacations really aren’t for moms, it’s just a different view.”

On our first morning at the lake we woke with the sun. Pale pinks and blues intertwine eventually bringing forth the sun’s golden hue. The lake held the sky’s reflection like a giant mirror. My eyelids fluttered as I gained my bearings. I was no longer home. The piles of laundry begging to be folded were absent, no cat rested on my legs purring and there was no noise except his breath and mine.

The window to my new world was bigger, broader and more beautiful. I immerse myself in its tranquility. This is new, there’s no noise or interruptions, no To Do list haunting my thoughts. I exhale and squeeze my eyes tightly shut in an effort imbed this peaceful vision in my head forever.

When I open my eyes a little redhead is staring right back at me, and again my view has been transformed.

**
They have been spending hours together, two cousins whose first meeting was a gazillion Christmas’ ago when neither knew how to count or spell. This time it was different and I watched as they played game after game together. He taught her how to play Stratego and Top Trumps, and they eventually found a common ground in hooks and worms on fishing poles.I witnessed a friendship grow and bloom in handful of a few short days.

**
It was his first time, standing on the pier he held up his catch of the day. A broad smile plastered across his face. He caught it with daddy, a father son moment that could only be made on the edge of a pier near a lake where we’ve never been. He didn’t want to touch the fish “it’s too slimy,” he said, but he did anyway with his dad’s encouragement. I watched them for hours sitting there side by side, fishing poles in there hands patiently waiting for the next bite. 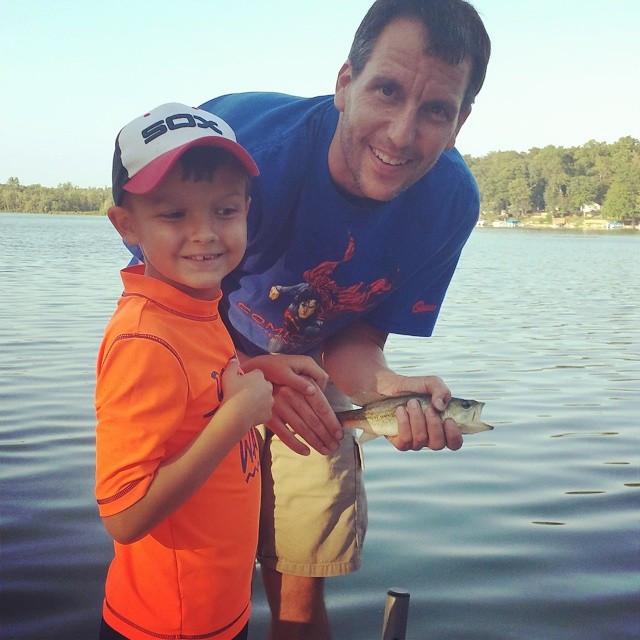 **
There are two Hemlock Lakes in Michigan one within a 50 mile radius of the other. Our house was at the wrong one. We wanted the one where my husband fished with his father, and where he chased turtles along the shore. He wanted to share those memories with our sons, so we drove the 50 miles to see the view. We waded in water my husband waded in when he was my eldest son’s age. We chased minnows and visited beaches and shared memories of days gone by and a cabin that had been replaced with weeds and wild strawberries. In one space I saw the past and present collide.

**
No trip to the lake would be complete without a boat ride. There were no motors or large yachts only a canoe and two oars. We set off. I barely moved an inch for fear of rocking the boat. My oar felt like a foreign object, and I held it awkwardly in my hand. It had been years since I rowed a boat, how does it work again? He took over for me, guided me and patiently showed me how to row. In moments we were a synchronized team…

We talked a bit about life and how things never seem to stay the same no matter how much you want them to. Then we were silent, listening to the snapping of twigs in the brush, the splashing of fish and the water as it lapped the side of the canoe.

It was time to head back cabin.

It was time to pack up the new life of the past four days and leave this view behind.

It was time to go back to the home we knew and loved.

The scenery whirred past my window, and I smiled because my mom was right the view was different and it was beautiful.