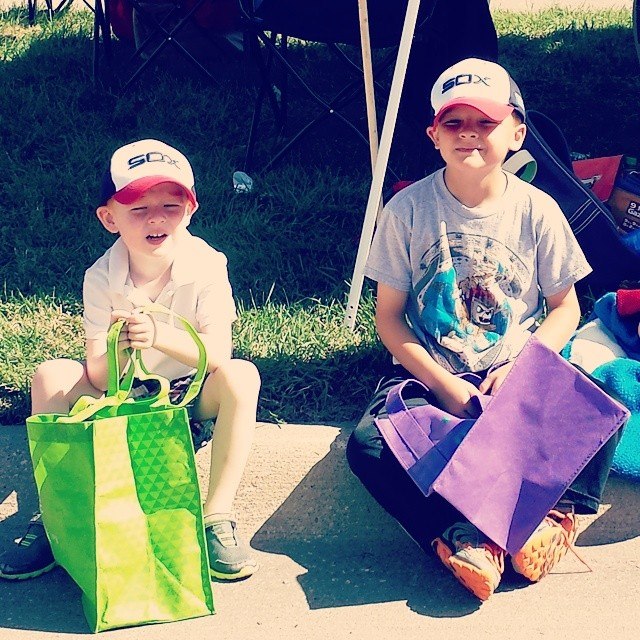 July 4th isn’t huge on my list of holidays. There aren’t presents or costumes, and it’s always hot, but we do have some Independence Day traditions that I look forward to. Unfortunately this year my kids didn’t share my same enthusiasm.

On the morning of July 4th we packed our candy bags for the parade and loaded ourselves into the car. I was dressed the part, blue tank top to match my red, white and blue plaid shorts, plastic star necklaces from Oriental Trading draped around my neck.

The kids however did not share my excitement, a Chima shirt and sweat pants {it was 80 degrees} somehow just don’t say America to me. I was disappointed, but let it go because it wasn’t a battle worth fighting.

At the parade Big E turned into a moody clam, not opening his mouth to even say “hi” to longtime friends. Meanwhile Little Red cried each time a piece of candy was swiped from his grasp. As I watched their craziness, all I could do was shake my head. I wanted so badly for them to just enjoy themselves, and the moment. To snap out of their funk and just have some freaking fun already.

As we made our way back to the car, each child a moody grumpy mess, I questioned myself. “Why go to all the trouble if they don’t even appreciate it,” I grumbled to my husband later that day.

“Well, don’t take them if they are going to act like that,” he stated matter-of-factly.

I can’t let them miss out on life and experiences, even if it makes them uncomfortable or they may not be too thrilled about it at the time.

No matter how bad it is, something in me just keeps trying.

So, later that evening after naps, afternoon shows and partying with friends we headed to the fireworks.

Dressed in PJs, the boys climbed out of the truck into a grassy field over looking the city, and began chasing lightning bugs and rolling in the bug laiden-grass. I cringed each time one of them fell to the ground nervous they would stand up covered in chiggers or ticks. “Please stop rolling on the ground,” I pleaded a gazillion times. After a gazillion and one times the hubs lost it and ordered both boys back into the bed of the truck. Tears ensued and both my husband and I sighed heavy sighs looking at each other and without saying a word thought the same thing “Why are we doing this again?”

It was hours past their bedtime by the time the first firework lit the sky. By then the tears had somewhat subsided, and grumpy moods were replaced by a few ooh, and ahhs. Although Little Red spent much the show nuzzled in his daddy’s neck, wanting to sleep.

Once the show was over, both boys and us were so tired we collapsed in a heap. I asked Big E what he thought of the fireworks and he mumbled “they were ok” and I was little hurt by his lack of excitement.

It wasn’t until last week when we were randomly talking in the car that he mentioned “you know mom those fireworks were awesome, can see some again sometime?”

“Of course buddy,” I replied with a huge smile on my face.

This year’s fireworks aren’t the first time this delayed appreciation has happened.

There was that camping trip in which the kids refused to hike trails, complained about the bugs and just wanted to cuddle up with the iPad. Then a month or so later both boys commented on how fun it was camping and begged to do it again.

And so goes the delayed rewards of parenting.

Often you wonder if the kids will ever appreciate everything you do for them., the family trips, the gazillion lunches packed, the glasses of water at 1 in the morning or the multitude of hugs, kisses and nose doinks.

The appreciation comes later, it could be hours, days, weeks, months, years or even decades, but if you are patient it will come and that’s when you know it was all worth it.

2 thoughts on “Scenes: Will They Appreciate it?”