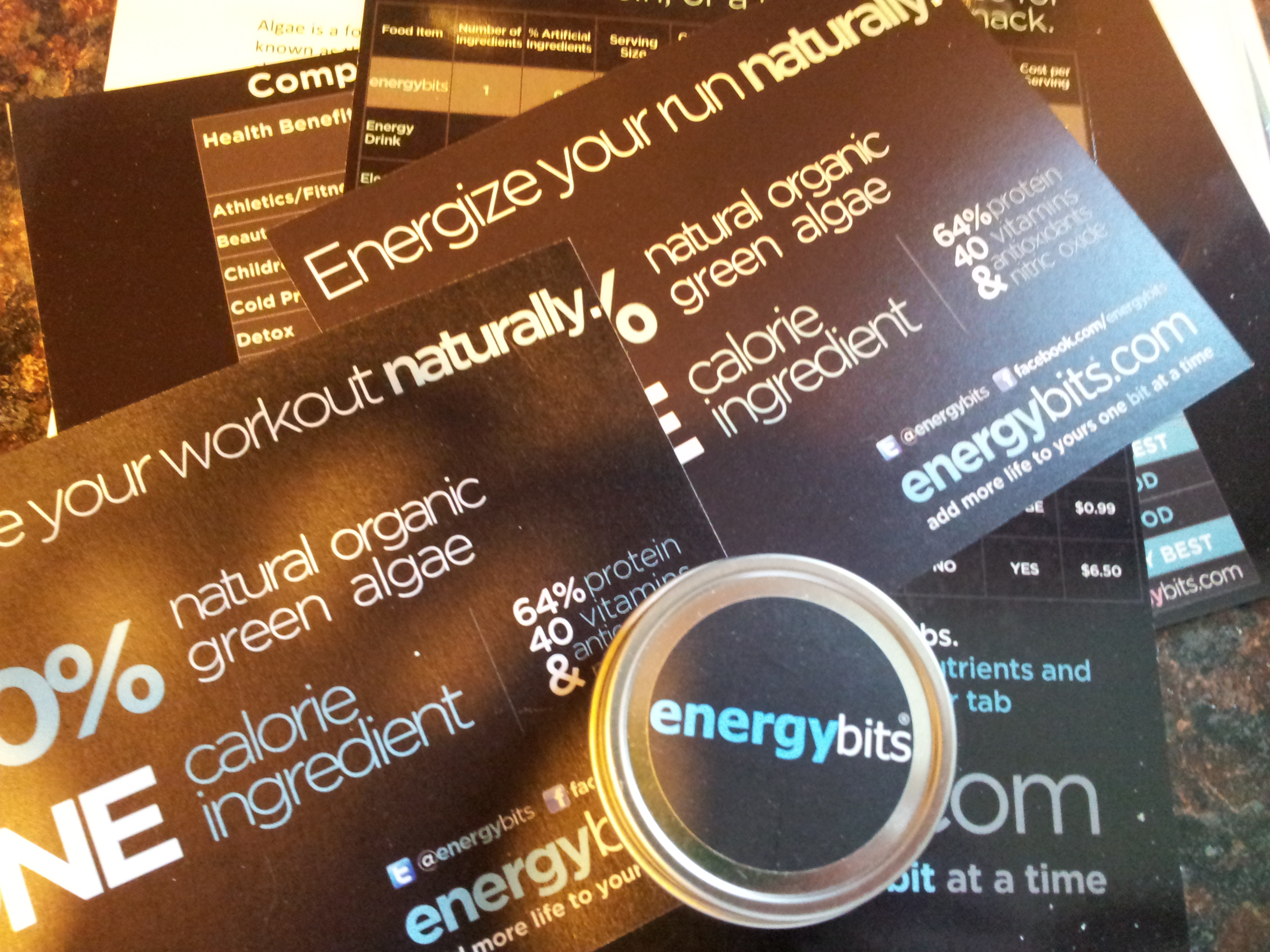 The nitty gritty: I received a free sample of ENERGYbits® to review. However, as always all opinions are my own.

During triathlon training this spring I was researching healthier alternatives to energy drinks and gels, and one name kept appearing ENERGYbits®.

ENERGYbits® algae tabs are your answer for raw energy and health. All naturally too. With just one calorie per tab, ENERGYbits® will stop your cravings, slay your hunger and give you a steady stream of energy all day or night. They may even make you want to leap over tall buildings in a single bound, but we think that’s best left to the guys in the red capes and blue tights.

So, it’s like super algae…fish tank and in the ocean algae. I was a little apprehensive. Really???

But this is a whole food, which is more than I can say for all the energy enhancing sports drinks and gels I consume. I remember receiving a sample of a blue-energy drink mix at my local health food store and the salesperson telling me not to be worried if my hands and feet start tingling that just meant it was working. What? No, that means it’s not good for you.

Plus my body goes wacko even with a minor amount of caffeine or energy boosting ingredient. I get the jitters and shakes, and just feel off.  All of this led me right back to the health benefits of ENERGYbits®.

Another bonus for me is the nutritional aspect, because even though I’m an athlete I don’t eat as many fruits and veggies as I should. ENERGYbits® contain all the vitamins and nutrition, including protein, my body needs to perform. 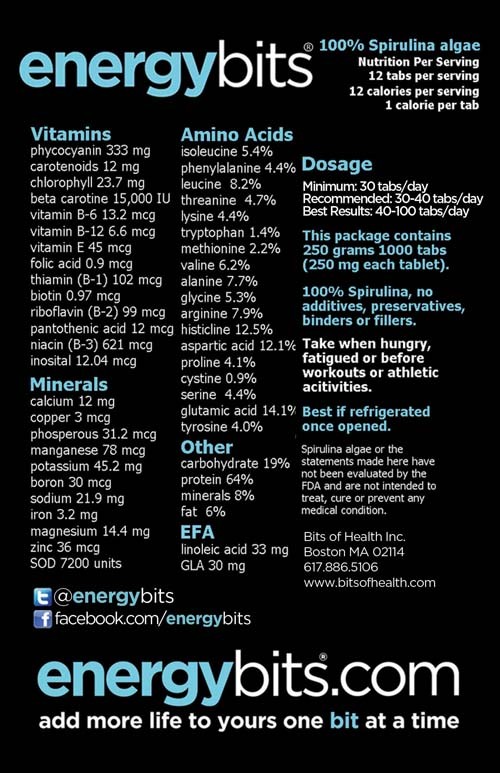 After reading all this I thought I’d test them out and the wonderful people at ENERGYbits® gave me a sample to try.

I gave them a taste and energy test for my run last week and my weight and cardio training yesterday.

At this point I need to add the disclaimer that I’m not big on “green” veggies. I’m not a lover of spinach or the like and have a small phobia of anything green. Obviously because ENERGYbits® are made from algae they are green … it took me a while to get past that.

That and the smell.

They warn you that the bits smell like a fish tank, and it’s true. However, after the second day of taking them, I didn’t really notice it much.

The other caveat, you need to consume 30 tablets before each workout. That’s a lot to swallow. They say you could chew them, but the bits do have an overwhelming “green” taste, and we all know how I feel about green things. So I just swallowed two handfulls with water and boom I was ready to go.

None of this was any different than taking a gel, I hate the taste and consistency of those too, but I still use them.

I didn’t notice much difference during my run that day. To be honest I think outside factors like heat and dehydration were an issue. However, during my weight training and cardio day {which was inside} I felt awesome. Initially, I was tired that morning, scratch that exhausted, but about a quarter of the way into class I felt great and was able to run a quick mile and a half {outside in the heat and humidity} without feeling exhausted.

Overall, I’d say ENERGYbits® are a great alternative to “fake” energy drinks and gels, especially if you are sensitive to those products in the first place. I’d also use them in a race, because they digest better than a gel, and won’t leave me with a sugary taste in my mouth.

Another thing I liked was they also sell RECOVERYbits®, which you can use on a daily basis to prevent illness. With little boys who are outbreak monkeys during cold and flu season, I think those bits will be a wise purchase.

ENERGYbits® run $110 for 1000 bits. However, after calculating it out that’s less than buying gels all the time.

Yep! I ate algae and liked it. So give ENERGYbits® a try, and see the health benefits for yourself.

Need more incentive? The wonderful folks at ENERGYbits® are offering my readers 10% off their purchase of bits with code BLOG.

So what are you waiting for? Grab your bits and get moving.

The nitty gritty: I received a free sample of ENERGYbits® to review. However, as always all opinions are my own.